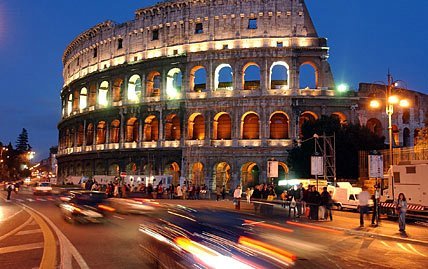 "We showed the emir several plans. The one that most caught his attention and which he said he wants his people to work on is the idea of a theme park on ancient Rome" the city's mayor, Gianni Alemanno, was quoted as saying.

The park would be located outside of the city canter and would allow visitors to re-live some of the sights and sounds of ancient Rome, from being a spectator at the Colosseum to going for a soak at the thermal baths.

Tourists could also watch re-enactments of Rome's most famous battles, descend into replica catacombs in which early Christians prayed in hiding or take a stroll through the ancient city's bustling market districts.

A plan for the project said it would include five hotels on site and would require some 600 million euros ($785 million) in private investment. The structure could host eight million visitors a year and create 9,000 jobs.

It would be spread over 300 hectares (741 acres). "We intend to find a location for it in the next few weeks," Alemanno was quoted as saying.

Another project presented to the emir was that of setting up a Roman museum in Qatar, using artifacts that are currently in storage, the reports said.

The emir during his visit confirmed the purchase by Qatar's sovereign wealth fund of a luxury resort on an idyllic stretch of coastline in Sardinia.