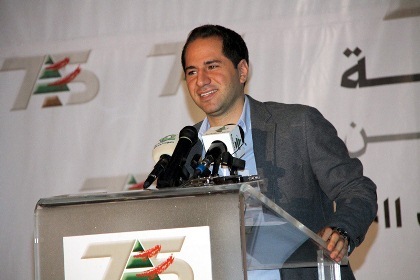 Phalange bloc MP Sami Gemayel on Thursday announced that he withholds confidence from Prime Minister Najib Miqati’s government, during the third round of parliamentary debate over the government’s policies.

“We withhold confidence from this government and this is our democratic duty and everyone must shoulder their responsibilities,” Gemayel said.

Addressing Hizbullah MPs who had addressed parliament before him, Gemayel said: “Your threats and rhetoric are unacceptable and they will not help build the state.”

Turning to the situation on the Lebanese-Syrian border, the MP said: “The Lebanese state is being violated and the Lebanese people are being killed, while the army has not taken any action to defend them.”

“What kind of state does not defend its borders?” Gemayel wondered, calling for abolishing the Lebanese-Syrian Higher Council.

Tackling the latest hike in oil prices, Gemayel noted that “the price of oil has dropped globally, while the cost here has risen 15 percent.”

“The government is considering how to grant a minister $400 million to compensate the closure of his stone-crushing plant,” the lawmaker said, referring to State Minister for Parliamentary Affairs Nicolas Fattoush without naming him.

Fattoush hit back after Gemayel’s speech, noting that his family was “seeking its right.”

“I call on the family to back down from its lawsuit should (former) president (Amin) Gemayel, (Sami’s father), return the commission he was paid in the Puma helicopters deal,” Fattoush said.

But Gemayel responded, clarifyig that “the Puma case was part of the campaign waged by the government in 1992 against all Christian leaders and (former) deputy speaker (Elie) Ferzli formed a commission of inquiry and said they did not find any evidence implicating president Gemayel in the case.”

During his speech, Gemayel called for forming a parliamentary committee “that can probe the bank accounts of everyone that governed the country in the past 20 years.”

“The problem does not lie in the current government or in the previous ones, but rather in the political system and a state that is built on corruption,” Gemayel said.

He's an honest and courageous young man, we do need more young people like Sheikh Sami.

The problem lies in the unaccountability of politicians. People glorify and almost worship the thieves whom they call their leaders. if this does not stop the corruption will not either.
As for sami to have integrity he should question his father's wealth too.

The next president will be from Kataeb !!

They killed the first one, and made the second one very ineffective!!!

This current political structure is very useless. Lebanon needs to be de-centralized, and then we dont care who is elected president.

I am sure the next snipper or car bomb, Flame Toz will say that Sheikh Sami, Syria and his fake resistance were brothers and had great relationship and EVERYONE is blind that it is Israel who did it to divide the Lebanese, same as Israel is trying to assassinate Mustafa Geha like his father.

He responded to hizbullah in a straight forward manner, asked what is the Army doing to protect the Lebanese borders and calling for abolishing the Lebanese-Syrian Higher Council.

Bravo Sammy. Far more honest and brave than Nassy and his cult will ever be.

May God always protect you Sami...

what naharnet "forgot" to say is that he also strongly criticized the Harriri and the Siniora gvts,(will they also delete this comment). and the confidence withhold move was masterfull, he gave the opposition something to do and the majority assured its supremacy again. Bravo Me Gemayel, wish there were one more like you in the opposition

I usually don't read Naharnet... and I despis(ed) the Phalange for their alignment with the Hariri "March 14" gang- following years of sheepish complacency towards Gazi Canaan...

This being said, I what Sami Gemayyel just said is true: "...we live in a failed state. It is time to end the cycle of failure" and we badly need a “neutral, pluralistic and decentralized state that distances itself from the policies of axes.”

Kesrweneh, so this government is better ? i don't think so...