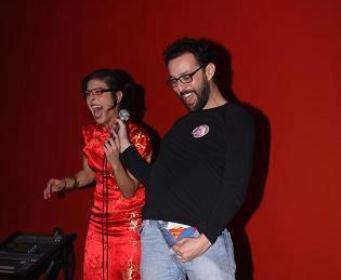 Edmond Haddad, known for his role on al-Jadeed television’s Chi.N.N. comedy show, and Rawiya al-Shab, who is a theater and film actress, were detained for a stand-up show they presented in 2009 at a pub in Gemmayzeh.

A local media outlet was covering the event and reported that their act had violated public morals when the comedians acted out a public auction in which men were auctioned off as a joke.

During the sketch, Haddad also reportedly showed some of his underwear, much to the disappointment of the unnamed media outlet.

The comedy show was initially held in order to raise money for the Brave Heart Fund on the occasion of Christmas in 2009.

The Fund is a volunteer driven initiative benefitting children with congenital heart disease.

The Beirut judge in charge of the case has held Haddad and al-Shab on charges of breaching public morals based solely on the newspaper article that initially made the complaint, said al-Akhbar.

The judge did not even consider viewing a dvd recording of the comedy show, it added.

Haddad was incredulous over the charges, at first believing them to be a “sick joke,” it continued.

Nizar Sarkis, Haddad and al-Shab’s lawyer, condemned the charges, likening them to oppression.

He told al-Akhbar that various ads and television comedy shows have committed greater offenses than the one that was allegedly made by the two comics.

He attributed the case to the spread of religious extremism in Lebanon and the region.

Haddad and al-Shab face a month in jail and a fine of LL200,000 if convicted.

A hearing in their case is scheduled for Wednesday.

A facebook page condemning the case has been formed.

This pisses me off more than HA weapons because it is just another form of "higher powers" dictating the Lebanese way of life. Lebanon deserves to be a free society after all the sh*t it's been put through and judging people for "breaching public morality" is a f*ing joke .

ah, dont blame this on religious extremism. Blame it on incompetent judges getting their positions through ma3arif, while the best in class (if he is lucky) is working in a bank for not having the same ma3arif

How about 'public morality' at the parliament? This censure act goes against freedom of speech and basic liberties but who are we kidding. The detention only shoes the immaturity of our 'public moral' system and who ever is enforcing it. We need to grow up.

lebanon is still in middle ages....

it would be nice to know who is the newspaper and who is behind it first.
then we might understand who is trying to do what.
it is disgusting to see something like that in lebanon, and note it is from 2009!

another comment telling how smart you are, you reached the bottom but keep digging

Morality? What morality? Lebanon is the opposite of morality.

This is the second time I see everyone agreeing on the same thing.
This means that there is still hope.

Another ridiculous Lebanese day in our life.

They are more concerned with a man showing underwear than with bombings, assassinations and an armed gang controlling big chunks of the country. Truly the sign of backwards thinking.

Morality is a personal and subjective entity, if someone finds what they did immoral he can boycott them, but arresting them for doing charity their own way now that's immoral

Freedom in the time of ekhwan. Unfortunately the phenomena is becoming pan Arab

What about the immoral statements by General Speedy gonzales that we have to endure every Tuesday?gets worse when he goes live on tv after forgetting under tongue blue pill yalle wasafflo yeha El Hakim