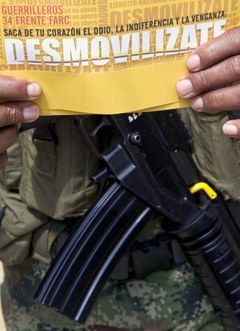 A French television journalist went missing in Colombia on Saturday following a leftist rebel attack on an army column that claimed four lives in the country's south, military officials said.

The reporter, identified as Romeo Langlois who works for France 24, was accompanying a military and police patrol in Caqueta province, where the Revolutionary Armed Forces of Colombia (FARC) are active, the officials said.

"The French journalist was accompanying the army unit in the course of an anti-drug operation when the unit came under attack from FARC forces," said a French embassy official.

Colombian authorities have launched a search operation for the missing, the diplomat said.

The FARC has been at war with the Colombian government since 1964 and is believed to have some 9,000 fighters in mountainous and jungle areas, according to government estimates.

Their deadliest attack this year was committed last month when the rebels killed 11 soldiers in the town of Arauquita, near the border with Venezuela.

FARC leader Timoleon Jimenez earlier this month denied that proposed negotiations with the government imply the guerrillas intend to surrender any time soon.

The FARC leader said the rich-poor divide in Colombia needed to be one of the issues on the table for future talks.

Earlier this month, the FARC released the last 10 police officers and soldiers they were holding hostage.

But Olga Gomez, president of the Free Country Foundation, estimates that the FARC is still holding more than 400 civilians hostage. The FARC says the foundation's numbers are false and biased, but has released no figures of its own.

The last French national held by the FARC was Ingrid Betancourt, a former Colombian senator and presidential candidate.

She was abducted in the midst of her presidential campaign in February 2002 along with her assistant, Clara Rojas.

Betancourt and 14 other hostages -- including three U.S. military contractors -- were freed by the Colombian military on July 2, 2008.