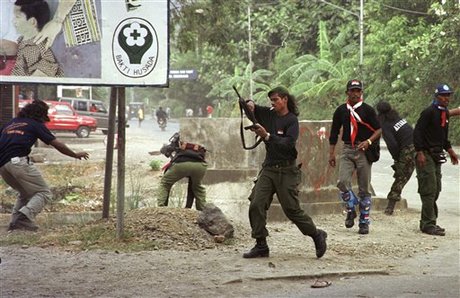 A governor in a Sudanese border state has set a one-week deadline for 12,000 ethnic South Sudanese gathered south of Khartoum to leave the country, state news agency SUNA reported on Sunday.

"The wali (governor) of White Nile state, Yusuf al-Shambali, confirmed that he has set May 5 as the deadline for the Southerners waiting in Kosti," a way station south of the capital, it said.

"The presence of Southerners in Kosti threatens the security and the environment for Kosti citizens," he said.

Some South Sudanese have been living in the town for months, in makeshift shelters or barn-like buildings, while they await a trip by barge down the White Nile River to South Sudan.

They are among an estimated 350,000 ethnic Southerners who the South Sudanese embassy estimates remain in the north after an April 8 deadline for them to either formalize their status or leave Sudan.

She said the IOM has funding to move 7,000 people by barge to South Sudan down the White Nile River, "and we think if we get going quickly we can get the funding for the other 5,000."

Despite the governor's order, movement of the South Sudanese is an issue under federal jurisdiction.

"Of course, there is an element of mistrust between South and north," he said.

A month of deadly clashes along the disputed border culminated in South Sudan's 10-day occupation of the north's main Heglig oilfield.

Sudan declared on April 20 that its troops had forced the Southern soldiers out of Heglig, but the South said it withdrew of its own accord in line with international calls.

Nak said Khartoum is asking for guarantees that the barges will not carry military equipment on their return trips after delivering the human cargo.

He said the government in Juba has assured its northern counterparts "that they will make sure that there will be no single bullet to be carried on those barges."

Since last year the IOM has helped return more than 23,000 Southerners, mostly by river barge.