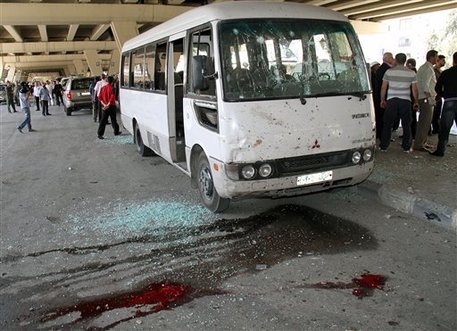 An Islamist group calling itself Al-Nusra Front has claimed responsibility on the Internet for a deadly suicide bombing in Damascus this week, the SITE Monitoring Service said on Sunday.

Al-Nusra Front named the bomber as Abu Omar al-Shami, and said he detonated his payload when members of the Syrian security forces who had assembled for Friday prayers in the Midan neighborhood had peaked to 150.

The U.S.-based SITE, which tracks jihadi websites, said the Islamist group posted its claim on the Shumoukh al-Islam site which is generally used by al-Qaida for posting its statements.

The Front said the attack was carried out at a place where Syrian security members had gathered to pray, and not next to the Zein al-Abidin mosque as reported by official media.

Syrian state television reported that 11 people were killed and 28 wounded in the suicide attack, and broadcast footage of the scene filled with smoke and people shouting as they ran.

Anti-regime activists accused the authorities of staging the bombing.

The Al-Nusra Front had previously claimed the February 12 twin bombings in Syria's northern city of Aleppo and the January 6 bombing in Damascus, SITE said.

so it is Islamist terrorist Syria is fighting? where is Geagea now? no falya7kum el 2khwan?

everything is fabricated by the syrian regime to justify their killings... strange the explosions happen only when foreign observers are in syria... strange that the fire fighters were near the scene minutes before the explosion...
strange this islamist group no one ever heard of...