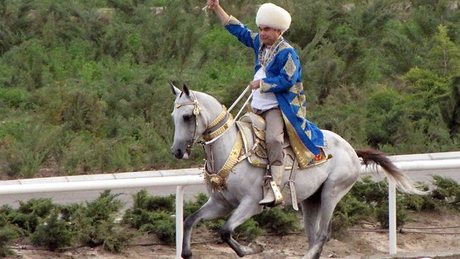 The horse-mad leader of Turkmenistan on Sunday hosted his second presidential beauty contest for horses in the isolated Central Asian state.

President Gurbanguly Berdymukhamedov awarded "the most beautiful horse of the year" prize to a thoroughbred stallion called Khan of the Eagles, which beat the nine other finalists decked in traditional bridles.

The leader then pulled off his jacket and leapt onto a horse to ride a victory circuit of the racecourse outside Ashgabat to cheers from the crowd.

The horse beauty contest falls on a national holiday, the Day of the Turkmen Race Horse in the ex-Soviet state, which is home to an ancient breed of horses called Akhal-Teke.

In the run-up to the holiday, state newspaper Neutral Turkmenistan published daily poems for a week on its front page singing the praises of the president's favorite horses, illustrated with color photographs.

Berdymukhamedov, 54, has written a book about horses that was published in a print-run of many thousands and once posed on his favorite steeds for a calendar.

The former dentist took over the leadership of the energy-rich state in 2007 after the death of the eccentric dictator Saparmurat Niyazov, who renamed months and days of the week in honor of himself and his family.

The new president removed some of the trappings of that regime but has launched his own cult of personality and is known by the unofficial title of the Protector.