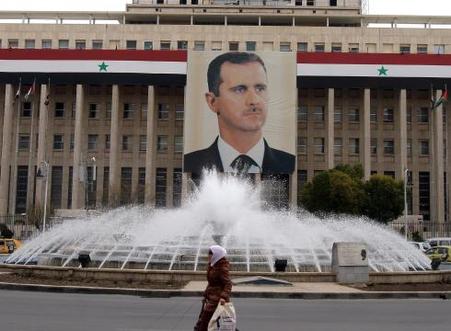 "An armed terrorist group staged an RPG attack on the Central Bank of Syria on Sabaa Bahrat Square in Damascus," the television reported. "Only material damage was caused."

It said three armed men in a vehicle carried out the attack at around 1:00 am (2200 GMT Sunday) before quickly making their escape.

The television said the assault was a clear breach of the more than two-week-old ceasefire brokered by United Nations-Arab League peace envoy Kofi Annan.

It said an "armed terrorist group" also carried out a second RPG attack on a police patrol in front of a hospital in the Damascus area of Rukn al-Din. Four police were wounded.

The ceasefire, which went into force on April 12, has taken a daily battering.

"To achieve the success of the Kofi Annan plan, I call on all sides to stop violence and help us continue the cessation of armed violence," said veteran peacekeeper Major General Robert Mood, as he arrived in Damascus on Sunday to take command of the U.N. military observer mission overseeing the truce.

Annan's plan calls for a commitment to stop all armed violence, a daily two-hour humanitarian ceasefire, media access to all areas affected by the fighting, an inclusive Syrian-led political process, a right to demonstrate and the release of arbitrarily detained people.

they shoulda put a hole in that stupid poster