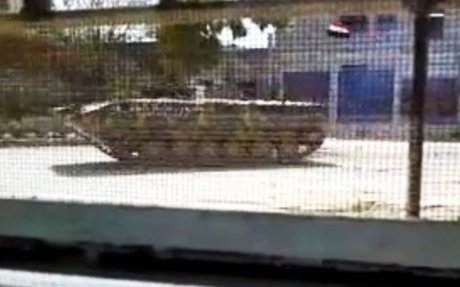 Ten civilians killed by regime mortar fire and 12 troops died in clashes with rebels were among 26 dead in Syria on Tuesday just hours after a new U.N. call for all sides to respect a troubled truce.

U.N. chief Ban Ki-moon said it was vital that government and opposition alike cooperate fully with a hard-won U.N. observer force as it fans out in its mission to shore up the ceasefire agreement that took effect on April 12.

But despite his appeal, human rights monitors reported no let-up in the violence, a day after a series of blasts condemned by Ban as "terrorist bomb attacks" killed more than 20 people.

Nine members of a single family were among the 10 killed in the regime bombardment of a village in northwestern Idlib province, said the Syrian Observatory for Human Rights.

A mortar round slammed into their home in Mashmashan village near the town of Jisr al-Shughour, the watchdog said, adding four women and two children were among the dead.

Elsewhere in the same province, random gunfire killed a 13-year-old boy in the town of Maaret al-Numan.

Outside Damascus, gunfire from a minibus belonging to the security forces killed an 80-year-old man in the town of Qatna, while regime shelling killed a civilian in a village of central Hama province, said the Observatory.

In Deir Ezzor province in the northeast, 12 soldiers were killed in clashes with rebel fighters, said the watchdog.

One civilian was also killed during the fighting in the Busayra area of the province, in which troops responded with missile and heavy machinegun fire, it added.

Ban called on all sides to work with the U.N. observer mission as it expands from the current advance party of 30 to a promised full complement of 300 in the coming days and weeks.

"While noting improvements in areas where U.N. monitors are deployed, the secretary general remains gravely concerned by reports of continued violence, killing and abuses in Syria in recent days," a statement said.

He called "for armed violence in all its forms by all parties to cease immediately and full cooperation of all parties with the work of U.N. Supervision Mission in Syria as it expands its presence on the ground."

Two observers are already deployed in Idlib, a province bordering Turkey where rebel fighters of the Free Syrian Army have been active. There are none in Deir Ezzor.

Two observers each have been deployed in three other protest centers -- the flashpoint central cities of Hama and Homs, and Daraa province, south of Damascus and cradle of the uprising against President Bashar al-Assad's regime that broke out in March last year.

The other 22 remain based in the capital.

In Monday's violence, bombings rocked Idlib city and the Damascus suburbs, with the deadliest hitting security buildings in Idlib.

Meanwhile, an Islamist group that has claimed several bomb attacks in Syria said it was responsible for a blast in Damascus last week that targeted security forces and an Iranian cultural center.

The Al-Nusra front said in a statement posted online that one of its members had attached an explosive device to an army vehicle and that it detonated at the cultural center in Marjeh Square, "hitting two targets in the process."

Police said three people were injured in the April 24 blast.

In his statement, the U.N. chief condemned what he called "terrorist bomb attacks" in Idlib and Damascus.

But the opposition Syrian National Council again accused the authorities of orchestrating the violence.

"The Assad regime is trying in various ways to mislead and distract (U.N.) observers in order to prevent them carrying out their work," the SNC said, calling for "an international commission of inquiry to uncover who was behind the explosions."

The butcher Assad and co. must leave or be killed.

The UN has gotten more people killed by tolerating petty dictators and tribal warlords and religious nuts since its inception than were killed in Korea and Viet Nam.

The way he shows his respect for life.....I say KILL!

Do not forget, however, that you ARE influenced by what is reported here. Assad is no angel, but the West has been working at getting things to this point, just as they did with Libya - for their own profit, not for humanity. http://www.youtube.com/watch?v=DawvDXiay3o&feature=share