Five Arrested for Trying to Blow Up Ohio Bridge 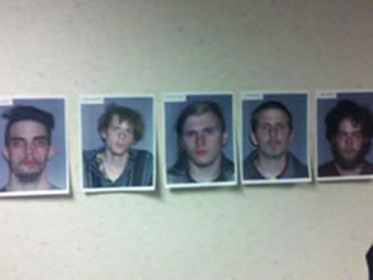 Five self-described anarchists were arrested in a plot to blow up an Ohio bridge but the public was never in any danger, the FBI said Tuesday.

The anarchists spent months discussing several different attacks before settling on the bridge near Cleveland.

They did not realize they were being closely monitored and had purchased inoperable explosives from an undercover FBI agent until they were arrested after trying to detonate the bombs.

"The individuals charged in this plot were intent on using violence to express their ideological views," Stephen Anthony, special agent in charge of the Cleveland division of the FBI, said in a statement.

"The Joint Terrorism Task Force will continue to be vigilant in its efforts to detect and disrupt any terrorism threat, domestic or international."

The FBI began to infiltrate the group at a protest in October after a confidential informant sent there heard them complaining that the rest of the people did not want to "act violently," the criminal complaint stated.

In later meetings, the group of young men said they wanted to attack "corporate America and the financial system" and discussed how they could make sure people didn't think their actions were "random acts" of violence, the charging paper said.

They initially plotted to distract the police with smoke grenades while knocking signs off bank buildings, but decided there weren't enough people in Cleveland willing to participate in a riot.

They eventually settled on the plot to blow up a bridge that spans the Cuyahoga Valley National Park, although they had also discussed blowing up a bridge downtown.

"Taking out a bridge in the business district... would cost the corporate big wigs a lot of money not just because of structural damage to the bridge but because it's going to stop a lot of people going to work," Brandon Baxter, 20, allegedly said in a secretly recorded conversation.

They eventually asked the confidential informant to reach out to his 'contacts' and help them buy riot gear and C-4 explosives.

One of the conspirators, Douglas Wright, 26, allegedly said he could raise the money by selling marijuana.

In the many conversations recorded by the informant, the men allegedly insisted that they weren't terrorists and didn't want to hurt anybody, debated how to download the Anarchist Cookbook without being traced online, and declared they would be sent to Guantanamo Bay if they got caught.

Some of the other plots discussed were: targeting the headquarters of a neo-Nazi or Ku Klux Clan group; attacking a hospital or bank with stink bombs, explosives or paint guns; sinking a cargo ship; derailing a train; and action at the G8 summit in Chicago or the Republican convention in Florida.

"The complaint in this case alleges that the defendants took specific and defined actions to further a terrorist plot," said Steven Dettelbach, U.S. Attorney for the northern district of Ohio.

"The defendants stand charged based not upon any words or beliefs they might espouse, but based upon their own plans and actions."

Kharjon. They deserve being caught and prosecuted. We all need more bridges in this world, not less. Now if anyone could identify and arrest the SOBs responsible for bombing he Mdeirej bridge by air in 2006, I would be even happier.

Those Shias won't quit, will they?