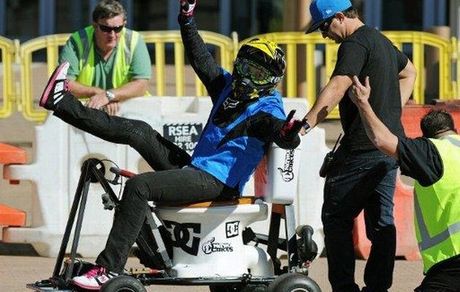 Van Vugt, a former Canadian motocross champion, steered the contraption through some early wobbles to 75 kilometers per hour (46 mph) in Sydney, seven kilometers more than the previous Guinness world record.

Police were on hand to record the feat.

"I flew into Australia yesterday and came out here to jump straight on the toilet," said the 31-year-old.

"That was so fun and I'm stoked to get the record."

Van Vugt, who is in Australia to perform at the Nitro Circus stunt show based on the hit MTV series, holds a host of world records, including being the first woman to backflip a dirt bike.