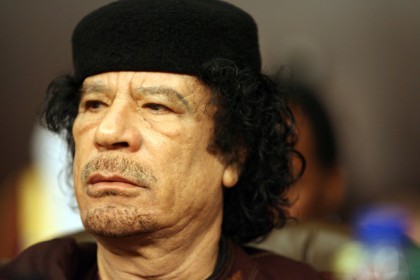 "Praising or glorifying Moammar Gadhafi, his regime, his ideas or his sons... is punishable by a prison sentence," said the text of the law read out to reporters by a judicial official following a high-level meeting.

"If those news reports, rumors or propaganda cause any damage to the state the penalty will be life in prison," the official quoted the text as saying.

"In conditions of war, there is a prison sentence for any person who spreads information and rumors which disrupt military preparations for the defense of the country, spread terror or weaken the citizens' morale," he added.

According to the law, Libya is still in a state of war following the 2011 bloody conflict that pitted Gadhafi loyalists against NATO-backed rebel forces.

A second law, also governing the transition, stipulates prison sentences for anyone who "attacks the February 17 revolution, denigrates Islam, the authority of the state or its institutions."

Yet another law confiscates all property and funds belonging to figures of the previous regime, including Gadhafi’s relatives, putting them under the care of the judiciary.

The tough legislation comes just weeks before elections for a constituent assembly which the NTC has pledged to hold in June.