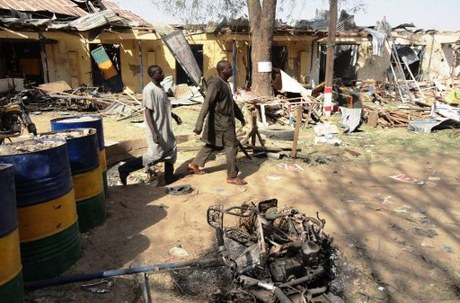 The head of Nigeria's Christians on Wednesday issued a "final" warning to the government that it must bring an end to attacks targeting the faithful after a new surge in deadly violence in recent days.

"I will now make a final call to the Nigerian government to use all resources available to it to clearly define and neutralize the problem as other nations have done," Ayo Oritsejafor, head of the Christian Association of Nigeria, told reporters.

"The Church leadership has hitherto put great restraint on the restive and aggrieved millions of Nigerians, but can no longer guarantee such cooperation if this trend of terror is not halted immediately."

Islamist group Boko Haram has been blamed for scores of attacks that have left hundreds dead in Nigeria, Africa's most populous nation roughly divided between a mainly Muslim north and predominately Christian south.

On Sunday, gunmen stormed two church services on a university campus in the northern city of Kano, throwing explosives and opening fire on worshippers as they sought to flee, leaving at least 19 dead.

Four others, including a pastor, were gunned down in the northeastern city of Maiduguri on the same day while leaving church.

No one has claimed responsibility for those attacks.

Boko Haram took responsibility for Christmas Day attacks, including a bombing at a church near the capital Abuja which killed at least 44 people. A bombing on Easter Sunday in Kaduna which was not claimed killed 41 people.

In the wake of the Christmas violence, Oritsejafor and others warned that Christians may be forced to defend themselves if attacks continued.

"At this point in the unfolding insecurity challenges, it has become irrelevant whether the root cause is political, religious, ethnic or ideological," Oritsejafor said Wednesday at the country's national church in Abuja.

"The fundamental issues are that the intimidation, killings, bombings and wanton destruction of lives and properties must stop immediately."

He added however that Nigerians should remain calm "as I am aware that the greater part of the overall design is to instill fear in the populace".

Boko Haram has regularly widened its targets in its insurgency which has killed more than 1,000 people since mid-2009.

On Tuesday, a video on YouTube purportedly from Boko Haram showed footage of last week's attack on a Nigerian newspaper and threatened news outlets, including the Hausa-language services of Voice of America and Radio France International.