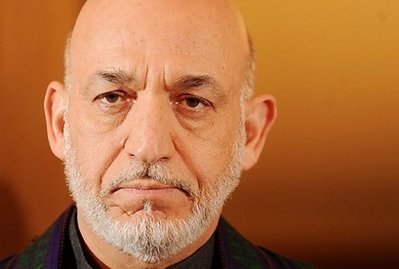 Afghan President Hamid Karzai urged international troops to "stop their operations in our land" Saturday on a visit to relatives of nine children killed in a NATO air strike.

"I would like to ask NATO and the U.S. with honor and humbleness and not with arrogance to stop their operations in our land," Karzai said.

In an apparent reference to Pakistan's border areas, where insurgents have hideouts, Karzai added: "If this is a war against terrorists and international terrorism, then they should go and fight this war where we have showed them (it is) over the last nine years and is known to them as well."

He continued: "We are very tolerant people but now our tolerance has run out."

Karzai was visiting Kunar province in eastern Afghanistan to meet the relatives of the nine children who were killed by a NATO air strike earlier this month while out collecting firewood.

A spokeswoman for NATO's International Security Assistance Force (ISAF) could not immediately comment.

The latest incident in Kunar forced the always-sensitive issue of civilian casualties caused by international troops back to the top of the political agenda in Afghanistan.

Karzai has angrily rejected a public apology from the U.S. commander of foreign troops General David Petraeus over the deaths.

U.S. Defense Secretary Robert Gates also said he was sorry personally to Karzai during a visit to Afghanistan Monday.