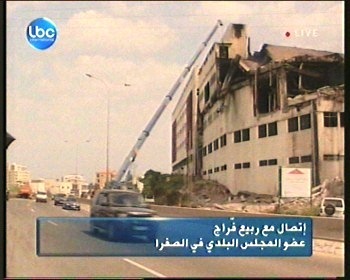 Two bulldozers and a crane failed on Sunday to demolish parts of the Byblos carpet factory building in the town of Safra that was engulfed in flames two days earlier.

The Internal Security Forces diverted the traffic to the seaside Tabarja-Jbeil road to prevent the debris from falling on the highway at 11:00 pm Saturday. One lane remained open for commuters heading from Jbeil to Beirut.

But the ISF reopened the highway at noon Sunday after workers failed in the demolishing process and after the closure caused bumper-to-bumper traffic.

The blaze that erupted at 9:00 am Friday on the fourth and then fifth floor raged for hours before firefighters partially doused it with the support of Lebanese army helicopters

The force of the flames caused a partial collapse in the building.

But the fire spread on Saturday to the lower levels of the huge factory, destroying what had remained from the factory’s equipment and stock.

The incident sparked criticism of the government’s leniency in the implementation of strong measures aimed at eliminating fire dangers in factories throughout the country.

Step 1: strengthen the government by removing ALL weapons from ALL non Lebanese military or security forces. Step 2: elect a technocratic government that can actually help Lebanon.