Jumblat: General Security has Become a Proxy for Syrian Regime 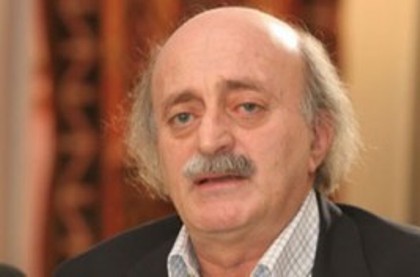 Progressive Socialist Party leader MP Walid Jumblat on Wednesday charged that “the General Security has become a proxy for the Syrian regime,” voicing solidarity with President Michel Suleiman over the issue of administrative appointments.

The General Directorate of General Security “has become a proxy for the Syrian regime and it acted in a foolish way, as it could have sent a judicial warrant to (Salafist activist Shadi) al-Mawlawi instead of luring him into a trap, not to mention the story of the Jordanian who was exported by Iran to Syria and by Syria to Lebanon in a story that reminds us of Shaker al-Absi.”

Local newspapers reported on Wednesday that Western security agencies have warned Lebanese officials that terrorist militants linked to an extremist organization have infiltrated the country recently to plot political assassinations.

Commenting on the reports, Jumblat said: “Where will they come from? From the Beirut airport which is under General Security’s authority? From the borders which are under the army’s authority? This myth reminds me of Abu Adas.”

Jumblat accused Syrian of seeking to end the Lebanese government’s so-called self-disassociation policy towards the crisis in the neighboring country, noting that “they want the government to support the Syrian policy and to make Lebanon a proxy, and the Syrian ambassador proved that by calling for implementing the (Lebanese-Syrian) treaty.”

“They believe that no voice should be higher than that of the Syrian regime,” he added.

Answering a question, Jumblat said: “I will maintain my centrist position as well as my opposition against the violence face of the Syrian regime and some of its allies that has started to appear in Lebanon.”

And as he declined to respond to Free Patriotic Movement leader MP Michel Aoun’s recent charges, Jumblat noted that President Michel Suleiman “has stood his ground bravely concerning the settlement over the issue of the eight billions and the 11 billions, and when he refused to implement the terms of the treaty with Syria and to hand over some Free (Syrian) Army troops to the slaughterers” in Syria.

Jumblat stressed that he will throw his support behind Suleiman in rejecting the proposed administrative appointments, saying they were “worse than the appointments made by Anjar during Rustom Ghazali’s era.”

Asked whether he will ask his ministers to resign from government, Jumblat said: “Everything will happen at the right time.”

The PSP leader also noted that calls for endorsing an electoral law based on the proportional representation system were “aimed at electing a submissive parliament and a president who is worse than (former) president (Emile) Lahoud.”

This embodiment of filth feudal warlord will not hesitate for one second to destroy this country. He is willing and always ready to collaborate with every enemy of Lebanon. Why is he not thrown in the gallows and hanged? For one, we live in a country of gutless, spineless, hateful and bind low lives. So get ready for a fresh round of massacres. You have been asking for it, low lives.

the STL, a court endorsed by the world community, issued arrest warrants for 4 suspects in the terrorist act that killed hariri and many others in the capital beirut in 2005: they are still at large and under the government's nose. Mawlawi is not accused of COMMITTING an act of terror, he was arrested to make an example of him for his activities in aiding the syrian refugees. The rest is feritales to justify the arrest. This is the government that refuses to give out telecom data in assasination attempts. This is the lebanon of 1st and 3rd class citizens. This is the lebanon where Fayez Karam, guilty of capital treason, is let go from jail after one year while others stay in jail for years without trials. This is how oppression mounts and how civil wars begin.

Dear "realist", you seem to be extremely well informed about Mawlawi's activities, so why didn't you share this valuable info with the Gen. Sec.? As for Fayez Karam, he was jailed for slightly almost 2 years and not 1 year as you mentioned. Finally, you cannot solve a problem with another one: if the 4 Hizbullah suspects are still at large, it doesn;t mean that all other suspects should do the same! If there are charges against Mawlawi, he should be under arrest and then released if proven innocent.

thanks for your daily posts that make us laugh!

If you want to be credible dont exagerate. Fayez Karam spent one year and a half in jail.
Mawlawi apparently is not a simple man as Salafist want to describe him. The war in Tripoli indeed proves that this is a bigger issue than a lebanese trying to help the syrian people. And why not take the threats of the extremists seriously ? Geagea escaped an assassination attempt , no ? There was a salafist group who infiltrated the army and got arrested ... And the information about possible assassinations against Rifi, Hassan, Sami El Gemayel, Birri .... I guess the security in Lebanon is at stake and I m with the General Security, the Internal Security and the Lebanse army to do their jobs and protect Lebanon.

The lebanse army is only good against 3rd class citizens i.e those who are not hizbustanis. Im sorry, that is the reality

god bless you ... & protect you from enemies you are the only one who telling the truth

Jumblat is one of the smartest guys in politics not only in lebanon but in the world. While he reads the events deliberately, he also acts as and when the time is convenient. This makes him one of a kind. I always listen when jumblat acts. He's better than all others. I admire him and because while he reads the sign correctly, he also acts, certainly within the framework of secterianism of Lebanon, in the best interest of Lebanon. I like anyone from which ever party they belong that works for the best interest of lebanon; and Jumblat is the best one fitting this model.

karim_m1 you r hilarious... A standard comment to every story. let me guess: you probably copy/paste the sentences everytime.

syria just want to send the chaos to lebanon to divert the atention... with the complicity of hezbollah...