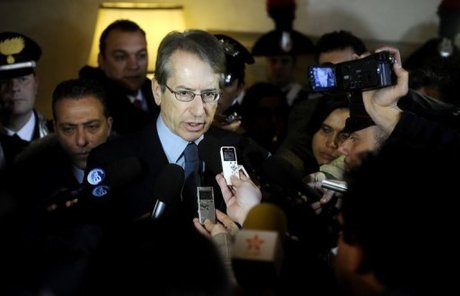 Italy is ready to support humanitarian corridors as part of any tougher U.N. resolution aimed at ending the bloodshed in Syria, its foreign minister said on Monday after a massacre triggered global outrage.

"We cannot stand by and watch dozens of children killed so brutally. We must do something," Giulio Terzi told La Stampa after 108 people, including many children were slaughtered in the central Syrian town of Houla.

He said Rome would support a "more robust" U.N. resolution but that the role of China and especially Russia, which have previously voted against resolutions on the crisis, was "crucial."

"If such a move is proposed in future, it should evaluate all aspects, including those related to the concept of 'responsibility to protect'," he said, adding that Italy would back the creation of humanitarian corridors.

Terzi also said Italy was setting up a field hospital in Jordan across the border from Syria in an area that would be able to accommodate up to 3,000 refugees, and was planning to send medical kits that could treat 10,000 people.

He also expressed support for strengthening the international observer mission in Syria to as many as 2,000 or 3,000 people.