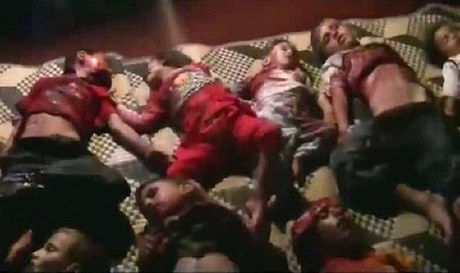 A top U.N. official said Tuesday there are "strong" suspicions that a militia loyal to Syria's President Bashar Assad carried out a massacre in the town of Houla which has sparked international condemnation.

"There is strong suspicion that the Shabiha were involved in this tragedy in Houla," U.N. peacekeeping chief Herve Ladsous told reporters at the U.N. headquarters.

Ladsous also indicated that the Syrian government played a major part in the massacre in Houla last Friday in which at least 108 people were killed.

The U.N. under secretary general said the number of victims from an artillery barrage "points to responsibility of the government" as only Assad's forces have tanks and other artillery. Ladsous added that the use of knives and other hand weapons "probably points" to Shabiha involvement.

A U.N. source said Sunday that a preliminary investigation into Friday's massacre had indicated that an artillery barrage by government forces against Houla had been followed up by a militia attack.

How can anyone kill a child? I think Syria reached a point of no return, which means it will get much worse.

I am not protecting the regime, but let's think a little bit about this:
There is something that does not fit: Syria's government is under enormous pressure, then they decide "well let's kill some children by knifes, and give all the people that are putting pressure on us the legitimacy", this just doesn't make sense. I would understand that the artillery-caused deaths are the responsibilty of the army but the slaying and slaughtering??!! This is a mark of extremists, who often use these techniques. That is the only way they could push the western countries to send their troops in. Whenever a western average person sees dead children on TV, he forgets his rational and logical thinking, follows his feelings and puts pressure on the government to act. It is just my opinion, and I hope the reaction will be rational and not religious, stupid and emotional.

Rabih, I see what you're saying, and it is a valid assumption. But dont forget assad hasnt shown himself to be rational in any way. if he was he would have told himself "F&@# this sh*t, I'll take my money and go somewhere nice and quiet" like the tunisian president did. he's living his happy ever after now.

the reason for this could be trying to pull off a horrendous massacre and blame the rebels. I dont rule out that it could have been the rebels who did it to get international attention and blame assad. but if past behavior is any good indication, assad and his regime are probably behind it. dont forget, this regime's cruelty didnt start in march 2011. it has always been known for it savagery and inhumanity

people who escaped the massacre said that they descended from tanks to enter the houses...assad like all dicators seeing he is going to fall soon, resort to desperate actions to spread fear among people and apply scorched earth policy... he doesn t hesitate to torture people like in the middle ages and you say that only extremists could do that massacre? isn t he an extremist?

shabbiha with the help of a well known lebanese militia...