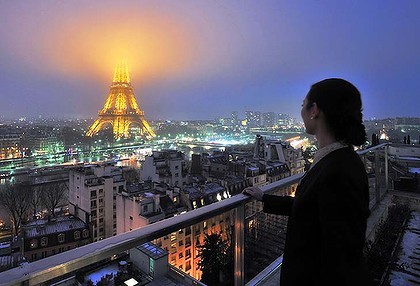 A Saudi princess was caught trying to leave the Shangri-La hotel in Paris without settling a six million euro ($7.4 million) bill for her rooms, police said Saturday, confirming a report in the daily Le Parisien.

Maha al-Sudani, the former wife of Saudi Arabian Crown Prince Nayef ben Abdel Aziz, tried to walk out on 3:30 am Thursday without paying for her suite and those of her 60-strong entourage, prompting staff to call in police, Le Parisien reported.

The Saudi Arabian ambassador was also contacted during the incident, added Le Parisien, which noted that Sudani enjoys diplomatic immunity.

When contacted by Agence France Presse, the luxury hotel's director Alain Borgers said that there are "no problems" with its clients and "no unpaid bills" at the moment.

The princess has already had previous run-ins over unpaid bills. In 2009, fashion chain Key Largo went to court to obtain 89,000 euros owed by the princess.

Scoundrels....What 's next checking her bags for hotel towels?

How the hell do you rack up 7.4 million in a hotel?