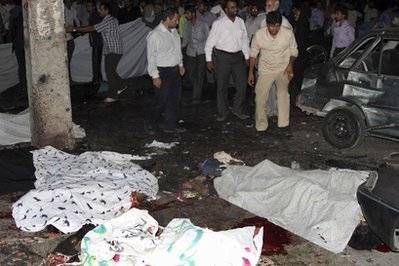 Sunni rebel group Jundallah claimed twin suicide bombings which killed 27 people in southeastern Iran, in a posting on its website, the latest in a string of attacks it has claimed against the Shiite country.

The rebel group, active in Iran's Sistan-Baluchestan province for nearly a decade, said it had targeted the elite Revolutionary Guards who were marking the annual Guards Day in the provincial capital Zahedan.

"Jundallah announces to the people of Baluchestan and Iran that tonight (Thursday) two of its sons, in an unmatched operation striking at the heart of the Guards who had gathered in a mosque in Zahedan to celebrate Guards Day, were able to send more than a hundred of the Guards to hell," said the statement posted on the group's http://junbish.blogspot.com/ website.

"In the first phase of the operation Abdulbasit Rigi blew himself up among tens of Guards," the statement said.

"After intelligence, security service and military personnel surrounded the area, Mohammad Rigi blew himself up, sending to hell tens of others.

"This operation is in response to the non-stop atrocities in Baluchestan by the regime, which thought that through the martyrdom of Abdolmalek (Rigi) the fight will end," the statement added.

It was referring to the hanging of the group's veteran leader on June 20 after Iranian warplanes intercepted a flight from the United Arab Emirates to Kyrgyzstan and security forces seized him.

The attack "has left 27 people martyred and 270 wounded," Health Minister Marziah Vahid Dastjerdi told the Mehr news agency Friday, adding that 11 of the wounded were in critical conditions.

Hossein Ali Shahriari, member of parliament from Zahedan, told ILNA news agency that more than 300 people were wounded in the attack.(AFP)