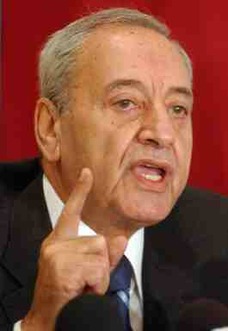 Speaker Nabih Berri warned on Wednesday of a foreign plot coupled with a local participation to drag the Palestinian camps throughout Lebanon to strife.

“The incidents at the Palestinian camps and the targets against the Lebanese army are not innocent and call for concern,” Berri told several newspapers.

“The foreign plot is present but there is an internal participation in it,” he warned, reiterating that the security incidents from the North to the South are not a coincidence.

He claimed the facts on the ground match the information that he received several weeks ago about preparations for a clash between the shantytowns and their surrounding areas.

Berri was referring to a warning from an Arab leader to a Lebanese official that Palestinian refugees could be pushed to ignite strife in Lebanon similar to the upheaval in Syria.

Al-Akhbar newspaper said Tuesday that the official, who is likely to be Berri, contacted Palestinian President Mahmoud Abbas, who sent Azzam al-Ahmed as an envoy to Lebanon to cooperate with the Lebanese authorities in the attempt to thwart the plot.

Angry Palestinians have clashed in the past five days with the Lebanese army at the entrances of the Nahr al-Bared and Ain el-Hilweh refugee camps, leaving three people dead.

Berri rejected “tampering with the morale of the army and the role that the national institutional plays in protecting Lebanese and Palestinians against the Israeli enemy.”

According to An Nahar newspaper, Progressive Socialist Party leader Walid Jumblat held a telephone conversation with the speaker, backing him in his warnings.

Berri also contacted Palestinian and Lebanese officials to contain the incidents at the camps.

Berri rejected “tampering with the morale of the army and the role that the national institutional plays in protecting Lebanese and Palestinians against the Israeli enemy.”

Lol, everything is connected to Israel.

all these conspiracy theories are getting old. I have yet to hear anyone accept responsibility for the bad situation in Lebanon. It is a lot easier to blame everybody else for your problems. Sheep mentality, corruption everywhere, religious fanaticism, 30 some years of civil war that took the lives of hundred of thousands people, and you still blame everybody for your misery. This country is hopeless!

I do believe berri when he says he is a target for assassination and the reason behind it is the following:
hizbushaitan is cornered and wants to affirm its grip over lebanon, thus the likes of berri, joumblat, aoun and others have become a burdon on them.
they are looking at a total grip on the country now that all is lost around them.

Foreign Plot by whom? Everyone knows that only the Syrian and Iranian regimes have the capabilities of inciting trouble from the refugee camps. If there is an outside factor in the latest camps events it has to be the result of the Syrian regime's efforts to ignite the Lebanese scene.
So, Berri, gather some courage and say the truth for once.

Yes, American leaders have a lot of courage??? They say everything the Israeli lobby tells them to say!!!

Foreign plots...I have been hearing about this ghost since I was born...Ziad Rahbani made a whole play about this. I wish someone starts naming things and providing evidence!

If you want to drive someone mental, plant a seed of doubt in them!

Thank you for the warning. But what are you three useless figureheads on top doing about it? Act, you bunch of incompetent bodies.

I think there is a plot including the Palestinians campt to halt any possible progress discussing Hezbs arms. I dont mean that it is Hezb behind this but:

By making the palestinians move, in the camps and feel threatened by the Lebanese army, this makes them feel insecure and less easily convinced to give up their weapons. This in its turn will lead to Hezb never giving up on their weapons. I wouldnt give up my weapons if the palestinian camps are still armed. So it´s understandable.

Many are the countries who want a peaceful settlement to any problem in Lebanon to fail.

isteez is angry, somebody stealing his job..or is he trying turn????

Really??!... Palestinians are the essence of all our problems now? Try to put history behind you!

Turkish party: CIA, Mossad responsible for Syria massacres 20 Jun 2012 A Turkish political party says the US Central Intelligence Agency (CIA) and Israel's spy agency Mossad are responsible for massacres in Syria, Press TV reports. A Turkish paper quoted the Deputy Chief of Turkey's Felicity Party, Temel Karamollaoglu as saying, "Not only the Syrian crisis will not be solved, but also it will lead to civil war." On the one hand, Western countries claim that they do not support armed conflicts in Syria, but on the other, the US is obviously making attempts to arm the Syrian rebels, who are fighting the Middle Eastern country's government, he said. "Due to having common interests in Syria, the US, Israel, and the EU make no attempt to stop bloodshed in the country."
[Reported by Citizens for Legitimate Government--Germany's Frankfurter Allgemeine Zeitung made the same charge last week]

Nothing of this is true. israel do not have any interest in removing assad.That is a fact.

Just like they did not have any interest in removing Mubarak.

Mr. Berri, are Syria and Iran foreign powers to you?

The Lebanese Army NEVER fought Israeli invasions and aggression (which they are not equipped or trained to fight and it is the main responsibility of a state).The Lebanese Army only knows how to kill Palestinian refugees and Lebanese citizens. Berri is an anti Palestinian sectarian bigot.

The Palestinians are living in forced exile in Lebanon because Israel is allowed to exist in the middle east as an ethnic cleansing racist settler state. I will forever fight the Israeli aggressors before I fight the disposed.