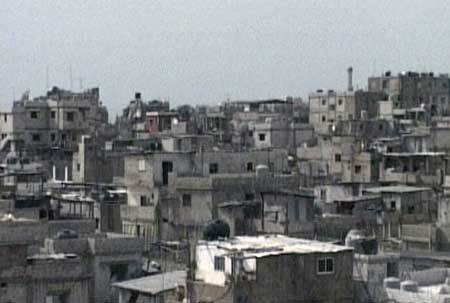 A personal dispute between members of the families of Jaafar and Dirani and Palestinian elements erupted into gunfire on Wednesday in the Beirut southern suburb of Bourj al-Barajneh, state-run National News Agency reported.

The incident did not cause any casualties, the agency added.

LBC and al-Manar TV networks reported that the clash broke out inside the Bourj al-Barajneh Palestinian refugee camp.

But MTV said the incident took place near the aforementioned camp.

Speaking to reporters in al-Musharrafieh area in Beirut’s southern suburbs, Charbel reassured that the security situation would be “excellent” during the one-month plan.

“We hope that the one-month security plan will be implemented throughout the year,” he added.

In addition to the Bourj al-Barajneh clash, the first day of the security plan was marred by the blocking of the airport highway and attempts to cut other roads in the capital in protest at the arrest of Wissam Alaeddine, a member of the group that attacked al-Jadeed television’s building on Monday.

The day also witnessed rioting inside a Justice Palace courtroom in Baabda during the trials of 14 suspects transferred from the Roumieh prison. The National News Agency said suspects G. Zoaiter and A. Younis started the riot and the rest of the suspects joined them.

Palestinians are the most powerful weapon in Lebanon against the Hezbollahi-Syro-Iranian hegemony. Unlike the Shias, those Palestinians are exiled victims against their will. The day Hezbollah gives its arsenal to the Army is also the day the Palestinians will surrender their weapons unconditionally. That's why it must happen quickly for the sake of EVERYBODY.

Amazing-- never heard such a wild interpretation on my life. Did you forget the Palestinians were the catalyst for the Israeli invasion? The civil war? Unlike the Shiia's? The Shiia's is a broad generalization, and as a Shiite from the south of Lebanon, we have nothing to do with what Shias from the Bekka area do when they steal cars, commit crimes, and deal drugs. Palestinians are a disgrace on this land and presumably you and your forefathers are probably the so-called Arabists who supported the Palestinians due to your common religion. I'm not sectarian, but Palestinians are a disgrace on Lebanon.

Are denying that Palestinians are literally living in precarious conditions and that's it's against their will? Even though I've only heard of Christian or Sunni Palestinians at the very least they are Arabs and Canaanites like us. They don't take their money from Persia... Well, not the ones in Lebanon. Although, you may have noticed that Ismail Haniye collaborates with the wilayat al fakin, which isn't in the interest of his people, but that he'll only learn his lesson later, when it'll be too late.

And after they surrender their weapons they must go back HOME.

They should be sent back to the west bank and Gaza, they should deal with Israel from Palestine, not from Lebanon. Akeed.

All camps should be disarmed, the Cairo accords should be abrogated, and the Lebanese security forces should enter all camps and restore order for them as well as be in control of security of the camps. The current arrangement is a ticking time bomb!

They will never go back to west bank and gaza. Forget it. We are stuck with them. Israel will not have them. And Yasser Arafat burned all his chances for a honorable peace deal. The best thing for them is to ship them off to qatar or saudi. these are countries that can absorb them. They are rich. They are sunni. They need people. Take them, and stop hiring indians.