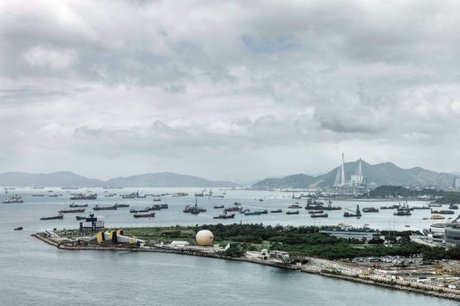 The donation of a major collection of Chinese art has breathed new life into plans for a cultural development on Hong Kong's waterfront that more than once appeared to be on the brink of collapse.

Leaders of the almost $3 billion integrated development known as the West Kowloon Cultural District are now more confident than ever that the project, already 14 years in the planning, will become a reality from 2017.

As a master plan by British architect Norman Foster for the harbor district edges forward, the artistic foundation stone was laid in June in the form of a donation of 1,463 works of contemporary Chinese art valued at $163 million by former Swiss diplomat Uli Sigg.

The collection, consisting of works by more than 300 artists including Ai Weiwei, Ding Yi, Fang Lijun and Geng Jianyi, is considered by many to be the largest and most important collection of Chinese contemporary art in the world.

"It's a phenomenal donation because in one go it defines this museum," said Lars Nittve, executive director of the yet-to-be-built M+ museum where the Sigg collection will be displayed from 2017.

"You can build big buildings, that are not so difficult, but to have a collection ... that's a major step," added the Swedish former director of the Tate Modern gallery in London.

The beauty of the Sigg collection is that unlike most private collectors, who generally buy what appeals to their personal tastes, Sigg set out to create a historical record of Chinese art, in all its forms, over the past 30 years.

"In the early 1990s I realized that nobody was collecting Chinese contemporary art even remotely systematically -- neither individuals nor institutions in China or abroad," the former Swiss ambassador to China said in a statement.

"That seemed odd for the biggest cultural space in the world, and for what will be in hindsight a very important period.

"So I decided to change my approach and collect like an institution would...I set out to create that 'document' about Chinese contemporary art that is missing in China, and missing outside as well."

West Kowloon Cultural District Authority chief executive Michael Lynch, the Australian former director of the Sydney Opera House who is in charge of the whole Kowloon development, said the Sigg donation was a breakthrough.

"It will serve as a major impetus for us to get the thing done," he told Agence France Presse at his office overlooking the site for the proposed development, which will include theatres, parks, residential apartments and an exhibition center.

Conceived in 1998 just after Britain handed Hong Kong back to China, the West Kowloon development was intended to give the southern city -- better known as a glitzy financial and shopping hub -- a world-class cultural space.

But the government's initial plan to develop the 40-hectare (100-acre) project in partnership with one of the city's property tycoons met a firestorm of public opposition and had to be scrapped.

Lynch's British predecessor lasted only a few months in the post before returning to London to join the British Council.

When Lynch -- who was chief executive of the South Bank Centre in London from 2002 to 2009 -- took over a year ago, the job was regarded by many as a poisoned chalice.

But the veteran arts administrator said the days of uncertainty are now over and the project is on budget and ahead of schedule, with the "digging" to start next year and the centerpiece M+ museum on course for a 2017 opening.

That is when Hong Kong's new leader, Chief Executive Leung Chun-ying, has promised full suffrage instead of the "small circle" vote by a pro-Beijing electoral committee that appointed him in March.

It's a timetable that is not lost on 61-year-old Lynch, who talks about the Kowloon cultural district as a "democratic space" where art, commerce and the outdoors will come together in an environmentally sustainable development.

"The next five years for us are going to be absolutely critical, as they will for the government that faces an election in 2017. I would have thought our interests are quite shared in that way," he said.

He hoped the development would "make Hong Kong a great world city" and "embody the best of cultural districts from other parts of the world".

The Sigg donation was proof that "this is a project to be taken seriously".

"I guess we've now solved a major part of the problem -- of what goes in the museum," he said.