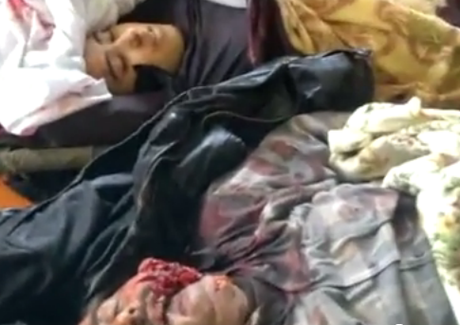 Red Crescent staffer Khaled Khaffaji, shot during overnight in the Syrian province of Deir Ezzor, died on Tuesday, bringing to 56 the number of deaths across the strife-torn country, monitors said.

The Red Cross Red Crescent condemned Khaffaji's killing, saying "this is the second time in less than a month that a member of the Red Crescent has been killed while on duty."

"We are devastated. The loss of Khaled is completely unacceptable," said Dr. Abdul Rahman al-Attar, president of the Syrian Arab Red Crescent.

"All sides must respect health-care workers and the Red Cross and Red Crescent emblems, and allow Syrian Arab Red Crescent volunteers to provide assistance unhindered and in safety."

The statement did not say who killed Khaffaji.

Five Red Crescent workers have been killed since the anti-regime revolt broke out in March last year, including the organization’s secretary general, the statement noted.

Meanwhile, violence raged across Syria, as troops rained shells on the rebel-held central town of Rastan, with activists saying the situation was "tragic."

"It really makes you want to cry," an activist in Rastan told Agence France Presse via Skype. "We have many wounded, and there are no doctors here, only two dentists. We can't do anything for the wounded. It's tragic."

Identifying himself as Abu Rawan, he said "we are out of electricity, water and food supplies. They've shelled the water tanks and destroyed the power lines."

Activists describe Rastan as the town with the highest number of defected army officers, and regime forces have tried unsuccessfully for several months to reclaim the besieged town in Homs province.

Of those killed on Tuesday, at least nine were civilians, four were soldiers and four were rebels, according to the Syrian Observatory for Human Rights, which said the identity of the remaining four was not impossible to confirm.

It is not possible to independently verify death tolls for the conflict in Syria since the United Nations at the end of 2011 ceased compiling such figures.

However, the Britain-based Observatory estimates that more than 17,000 people have been killed since the uprising erupted in mid-March last year.