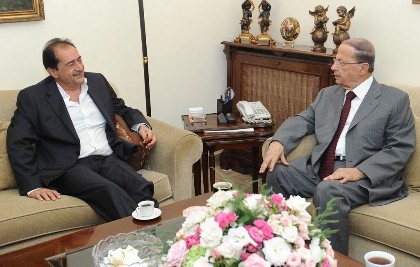 Free Patriotic Movement leader Michel Aoun expressed his keenness to the legacy of Lebanese philosopher and diplomat Charles Malek, a day after Lebanese Forces chief Samir Geagea accused the March 8 majority of seeking to transform the district of Koura where Malek was born into the territory of Syrian President Bashar Assad.

“Charles Malek was of course a personality with influence in Koura’s history,” Aoun said. “But history has had different symbols at different stages.”

“No one is keener than us on the heritage of Charles Malek,” he told reporters at his residence in Rabieh following talks with former MP Salim Saadeh.

Geagea told an LF delegation on Thursday that “the Koura of Charles Malek, the only individual in the region who helped draft the United Nations Universal Declaration of Human Rights, cannot be transformed to the Koura of Bashar Assad, who is slaughtering his own people.”

Geagea was referring to Sunday’s by-elections to fill the Greek Orthodox seat vacated by the death of LF MP Farid Habib.

The March 8 majority is backing Syrian Social National Party candidate Walid al-Azar in the polls that are pitting him against LF candidate Fadi Karam, who has received the strong support of the March 14 opposition alliance.

Several other people have announced their candidacies but the major rivalry is between al-Azar and Karam.

Ya General, Dr. Malek is turning in his grave now...just FYI, Dr. Malek was a founder of Lebanese Front which opposed any syrian hegemony over Lebanon. So please do not patronize him and never ever make any reference to him, as traitors like yourself are not allowed to even quote such a Lebanese legend...

The koura people are too close to the salafi to vote for their minions aka geagea, I think despite the dollars paid LF will loose badly

in this nice Pic Aoun sayen "Geagea, i want the presidential chair and here u go 100U$D" and Geagea replyen"ma btekfe ya doub tjeble Kleenex" CHEARS

How could a so called Lebanese support a syrian influenced party like the marada. Shame on you,you should be stripped of your Lebanese citizenship.

yaret marada bass. ssnp, a group of thugs that dont even believe in Lebanon as an independent country

the1phoenix, I dont have any issues with what you are saying but I do have 2 comments.

In 1989 the LF was dragged into the war by this madman Aoun which was the wrong thing to do, but I guarantee you that if Bash was still around he would not have even accepted a cease fire until Aoun was completely crushed (listen again to his speeches especially the ones after Haddath). I dont blame Geagea for Aoun's crazy dream to become the president even if the entire country was destroyed.

2nd, if you look around, who could better represent the christians today and remain committed to the entire country? I would say Geagea is on top of the list.

Ouwette & phoenix, no need to get very emotional at this point. Although many mistakes were made in the past but the road to Jerusalem never went through Jounieh as many were hoping for. Learn from your past but keep moving forward. Things will get better and hopefully soon. Lebanon always prevails even though our history is more like "Via Dolorosa".

Guys, it is Friday night so grab a beer and enjoy your weekend...

Doesn't the clown know that the SSNP killed Charles Malek and they were boasting about it. When LF killed Tony Franjiah the SSNp were laughing so hard and having fun at both parties. They said to me we succeeded in dividing them and now we will get Franjiah on our side. The SSNP are loosers and they are not nationalistic by any means. they have this stupid theory about uniting so many countries and they're so divided themselves. why don't Aoun and Franjiah stop supporting these idiots at least and stop getting paid by Syria and live honorably. I do not give a damn about Geagea or Hariri..