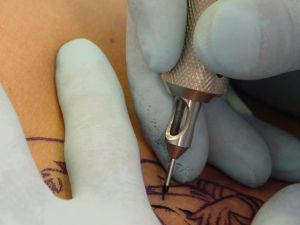 A Lebanese man nicknamed the "tattoo king" has been sentenced to one year in prison and 200 lashes in the conservative Muslim kingdom, a Saudi newspaper reported on Tuesday.

"Investigations revealed the Lebanese had been practicing this job for nine years," said al-Madina.

"At first, he used to receive women in a rented apartment (in the western city of Jeddah) but later he began going to women's homes to draw tattoos on their bodies" to avoid being caught by Saudi religious police, said the daily.

He was finally nabbed by members of the Commission for the Promotion of Virtue and Prevention of Vice (religious police) in an undercover operation.

"They seized with him a bag in which he carried creams for weight loss, breast firming and for skin whitening," al-Madina said. They also found on his mobile phone pictures of tattooed women.

Prosecutors said they would appeal for a stronger punishment against the man, who is also accused of having met privately with women in the Gulf state where mixing of the sexes is prohibited, said al-Madina.

Tattooos are not in keeping with Islamic tradition but not officially banned.

where's the prob, you have to control your families and daughters not to punish this guy.

Wahhabis were retard centuries ago and they haven't evolved since

.....yet again these guys prove themselves to be camel riders.

200 lashes for a few tatoos. I wonder about the sentence for burning the jeddah airport road...

Slash it seems you head is in your ass. Typical from a Hakim follower who looks up to Wahhabi trash. Rouh nde7esh fiyon and keep your dirty hands out of Lebanon. Kalb.

You are right wahabis stink. But Slash just said that is their right to do what they want in their country. It doesnt mean he is wahabi. What is this new insult "wahabi" people are throwing on everyone? What is this need to insult those u dont agree with?

slash, i do not know if you really follow the person ion your avatar photo... but most of your posts is dedicated to defending arabism and saudi arabia and their allies. i do not recall sheik bashir being such a wahabi defender like you. if their laws are to execute all christains... do you defend their law? if their law is no protesting by citizens against the government, do you defend that law?

please stop your stop your embaressing comments defending arab insanity against fellow lebanese. the lebanese forces was banned by the lebanese government in the 90s... did you respect that law or did you ignore it?

The highest Wahabi authority encourages sex and marriage with little girls, younger then 12. Saudi Arabia should clearly not be a country, the draconian state is a pedophiles paradise and home to almost all things Al Qaida. What a sick sick society. Someday, I hope we wake up and slam them for their atrocities against humanity.

No one forced anyone to get a tattoo.

well he's gonna get a tattoo of 200 lashes on his back, it will hurt but its gonna look awesome after the swelling is gone.

Slash stated a fact and the fact is, at the end of the day, it is their country and they can trash it the way they want. That does not make him one of them nor their advocate. When the LF were banned and Gen Aoun was exiled, we did ignore it because those verdicts were issued in OUR country. The moment those savages start importing these dark ages mentalities to OUR country, which actually started already, is the time when we should insult them and kick them out. The only problem Lebanese as a whole have is not having THEIR country as their utmost priority.

No, traditions are not to be respected when they limit freedoms. CONSERVATISM=ABSOLUTE STUPIDITY!
All 3rd world countries should stop following these archaic traditions. Even if the majority supports them (for lack of education and brains), we shouldn't have to suffer under them.

Plus, he's a Lebanese citizen. Are we just gonna let them subjugate him to their medieval Arab/Islamic punishment?!

I totally agree with Slash, when you are a guest at any country, you follow the law of the land ... this is FINAL. Whether it is murder or littering of the streets, law is law, you break it you get punished!

Most of you are having a difficulty understanding this idea because you never followed any law.
ya3ni ya shabeb ... she byerfa3 el ras ...

1 year and 200 lashs, Saudi are still living in stone ages , this guy should not be punished , he must come back to Lebanon without punishment asap , Enough of your Saudi stupidity we are in 2012