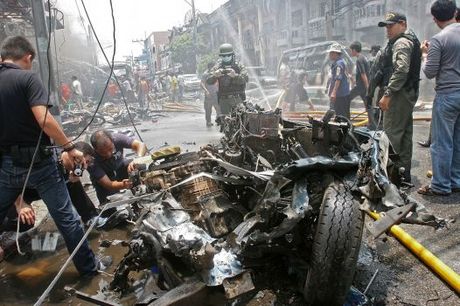 Two civilians were killed and four wounded in bomb and shooting attacks in southern Thailand, a military spokesman said Friday, as the region marked the start of the Islamic holy month of Ramadan.

A 25-year-old male security guard was shot dead by gunmen in Pattani province on Thursday morning, while a 39-year-old man was killed later in a roadside bomb attack in neighboring Yala, which also left one person with shrapnel injuries.

A car bomb ripped through a shopping street early Friday in the small town of Sungai Kolok, in the southernmost province of Narathiwat which borders Malaysia, wounding three people and destroying several shops.

The explosives had been packed inside pick-up truck parked on the street and triggered as people gathered at a morning market, he added.

Authorities had warned that militants were likely to attempt a large-scale attack ahead of Ramadan.

A shadowy insurgency, without clearly stated aims, has raged in Thailand's three southernmost provinces -- Pattani, Narathiwat and Yala -- since 2004.

Daily bomb or gun attacks have targeted both soldiers and civilians, Buddhists and Muslims, claiming more than 5,000 lives in eight years.

A state of emergency is in force in the worst-affected parts of the region, which rights campaigners say in effect gives the tens of thousands of military troops based in the area legal immunity and fuels rights abuses.