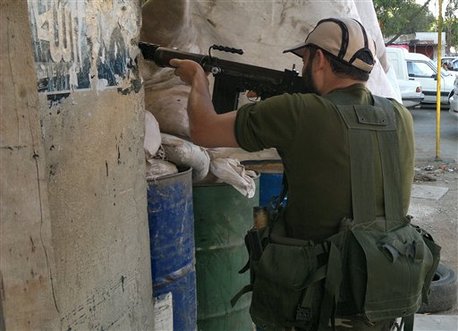 Twelve people were injured in gunbattles between rival neighborhoods in the northern city of Tripoli as sniper fire prevented motorists from using the Tripoli-Akkar highway, the National News Agency reported Saturday.

The army fired back at the source of gunfire, the agency said.

The army command confirmed the report saying the military continued on Saturday to carry out patrols in the tense areas of Tripoli, set up roadblocks and raid the sites where the gunmen are hiding.

“Several suspects were detained and a large quantity of light ammunition was seized,” the army said in a statement.

Three soldiers and several civilians were injured in the incident, the army communique said.

Also Friday, a gunfight erupted between young men from Bab al-Tabbaneh and a family in al-Zahriyeh but the army contained the incident and conducted patrols in the area.

The international highway that links Tripoli with the northern district of Akkar also witnessed sniper fire in the areas of Duwwar Abu Ali and al-Mallouleh, NNA said.

Motorists were forced to take secondary roads to escape the fire, the agency added.

The fighting was condemned by al-Mustaqbal MP Khaled al-Daher, who said during a press conference that “Tripoli’s residents reject gunfights."

He stressed however that mainly Sunni residents of Bab al-Tabbaneh did not return fire when attacked by Jabal Mohsen, whose residents are followers of Syrian President Bashar Assad.

Addressing Prime Minister Najib Miqati, the Akkar lawmaker said: “Your cabinet is not serving any team in Lebanon.”

“It is a government of failure … that harms the Lebanese people and has only one objective of serving the Syrian regime,” he said.

Al-Daher added that Miqati should resign to preserve his dignity and Lebanon’s honor.

apart from speaking constantly spreadig sectarian talk, is there anything you can add?

The more filthy Sunnis get terminated the safer the WORLD will be.

all the above writers are so stupid, no wonder Lebanon is disintegrating and going to 1975 days. We are living in 21st century what does it say when a personnel dispute is blown to all out firefight. Look at yourselves read what you write, hate, hate hate
Wake up godloving and peaceful people of Lebanon, don't sell yourselves to those corrupt people who havethe money that monipulate you

When will the lebanese army have fighter jets and advanced helicopters to really intimidate both parties who are simply breaking the law by holding a weapon on pubic grounds. Seriously, i am sure these people are not scared by a counter offense by the lebanese army. Some order needs to exist in lebanon quickly before these small battles move to other areas of this country.

you idiot, people in tibani are lebanese, but there are saudis in there fighting and starting trouble, your in denial but its all right because theyve taken ur area and controlled it,
for example,,why did 2 people from bab el tibani have to stab someone for, thats what started the shooting.
you dont even care about ur own people so why am i even talkin to you,,waste of time

so saudis r in the tibeneh and they r stabbing pple from jabal mohsen and im denial and an idiot wow u have a good imagination..inta ur right whoever duid the stabbing byit7assab ma3 rabo cuz they had no right to do it bass dont say i dont care about my own my pple cuz when gernades fall from the jabal ur pple dont care about whose getting hurt wat if a kid was walking wat the hell did he do to u guys bass like always into u guys r 2abadyet w marajil...jabalm ur a loser and trying to cause problems y dont u be part of the solution instead of the problem and lets help both jabal and tibeneh as lebanese pple not a failed syrian regime

sooo dumn passports is saudi lik ya ahbal u know every1 maheik saudis hahahaha leik seriously use ur head i know u have 1...and im not afraid of jabal mohsen i have alot of friends there bass w even if i didnt i would go myself its part of libnan

i love it...just disappointed on how we can all be stubborn and act like a bunch of children when we should all grow up stop accusations and religious slurs w start acting like lebanese

That's the point so let's set an example start here on naharnet !!!