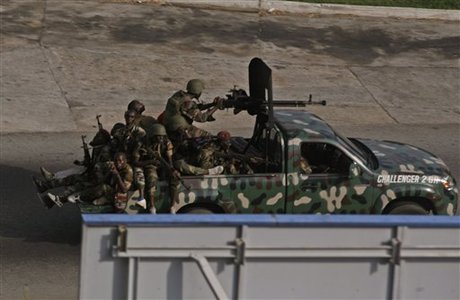 Mass graves have allegedly been found in western Ivory Coast as a picture emerged Saturday of carnage amid fierce post-election battles, which the ICRC said claimed 800 lives in a single day.

The government of internationally recognized president Alassane Ouattara said numerous mass graves had been found, "especially in Toulepleu, Blolequin and Guiglo, whose authors are none other than the loyal forces, mercenaries and militias of Laurent Gbagbo."

The accusation came after the International Committee of the Red Cross (ICRC) said "at least 800 people" were killed on Tuesday during fighting in Duekoue, a major crossroads in western Ivory Coast.

Four months after a disputed election, with Laurent Gbagbo clinging to power despite an international consensus that he lost, Ouattara's army launched a lightning offensive across the country before besieging the economic capital Abidjan.

As heavy fighting shook the city of five million, world leaders urged Gbagbo to step down immediately, citing concerns for citizens caught up in the bloody conflict.

In the west, it appeared that gross human rights violations had accompanied the fighting. Although the circumstances remained unclear, the ICRC said it looked like inter-ethnic violence.

"At least 800 people were killed in Duekoue on Tuesday," an ICRC spokeswoman in Geneva, Dorothea Krimitsas, told Agence France Presse, adding that information on the death toll had been gathered by Red Cross workers who visited the area on Thursday and Friday.

"There is no doubt that something on a large scale took place in this city, on which the ICRC is continuing to gather information," she said, adding that Red Cross workers had "themselves seen a very large number of bodies".

The head of the ICRC delegation in Ivory Coast, Dominique Liengme, said the carnage was "particularly shocking by its size and brutality," according to the statement.

The Geneva-based organization said tens of thousands of women, men and children had fled the fighting and looting in Duekoue since Monday.

Duekoue, a major strategic crossroads in the west of the country, has been under the control of Ouattara forces since Tuesday after two days of fighting.

As the violence spirals out of control in the world's top cocoa producer, both camps have been accused of atrocities that could be considered crimes against humanity.

Human Rights Watch said Saturday that while the vast majority of abuses have been by Gbagbo forces against supporters of his rival, Ouattara should rein in his troops ensuring they "do not commit reprisals or other abuses against civilians or supporters of Laurent Gbagbo."

Ouattara's government said it "firmly rejects such accusations and denies any involvement" of his army in possible abuses.

Ouattara's camp said it was convinced Gbagbo's fate had already been sealed.

"I don't think Laurent Gbagbo is capable of resisting for much longer with all the defections in his ranks. ... He is condemned to be removed," Ouattara's spokeswoman Anna Ouloto told AFP.

"Laurent Gbagbo must step down to avoid a bloodbath. Hopefully he will, or we will go and fetch him," Ouattara's Prime Minister Guillaume Soro told AFP.

Several hundred people have been killed in the aftermath of the presidential election in November, and the U.N. estimates a million people have fled Abidjan in recent weeks fearing a bloodbath.