Berlin's Oldest Squatters Take a Stand for Their Social Club 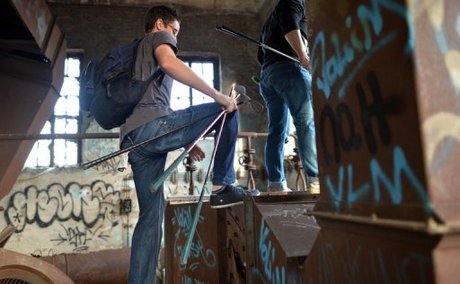 Some of Berlin's most senior squatters are nearly a century old, but age is not stopping the scrappy bunch from fighting impending eviction from their cherished social club.

The cash-strapped authorities in the former communist eastern district of Pankow have said they need to cut around five million euros ($6 million) from their budget and plan to close public facilities to do so.

Among the sites hit is a villa on Stille Strasse, the home of despised Stasi secret police chief Erich Mielke in the 1950s and now a beloved gathering place for some 300 pensioners to play chess, learn English, dance and socialize.

The stately old place is surrounded by mature trees and, most recently, draped with banners reading "Hands off!" and "This house is occupied".

"We always told them we were prepared to occupy the building for the cause. The politicians didn't believe us," club president Doris Syrbe, 72, told AFP.

The Pankow administrators say it would cost 2.5 million euros to renovate the site, which has been used as a clubhouse for nearly 15 years. Maintenance costs reach 60,000 euros annually.

The district now aims to sell it out from under the grey-haired patrons on Berlin's buoyant real estate market.

But the senior citizens say they will not take the city's announcement lying down and since early July have hung out the banners and taken turns occupying the gracious old mansion all day and night to ensure no one locks them out.

"The house was to be closed for the summer and we were afraid of not being able to return after the holidays," Syrbe said.

Although Pankow has offered alternative meeting places, the pensioners are having none of it, saying the other options fail to offer the facilities needed for them to continue their fitness classes, for example, or to accommodate all the current members.

"We were ready to move but somewhere in the neighborhood, and everybody together," Syrbe said.

"We refuse to be split apart," added the retired telecommunications engineer.

They have also taken their campaign online to the social mobilization site Change.org and collected more than 4,900 signatures.

The seniors aim to hand a petition with 10,000 names to officials in the district administration at a council meeting later this month.

A 29-year-old representative from U.S.-based Change.org said she wants to get the elderly activists to deploy Twitter as well and was checking to see if their mobile phones were equipped to use the micro blogging site.

Officials have meanwhile cut off service to the landline telephone at the center.

"You can't make a claim to a telephone paid for by the district in an illegally squatted house," town councilor Lioba Zuern-Kasztantowicz told local media, citing the acute need for budget cuts to justify clearing the space.

House-squatting has a long tradition in Berlin. During the Cold War, young activists in the West of the city demonstrated their disgust about property speculation by taking over buildings.

When the Berlin Wall fell, the practice spread into the eastern districts.

The average age of the rebels on Stille Strasse is about 70, however, with some well into their 90s. They say they are entitled to a peaceful, publicly financed place to paint, play cards and sing in a choir.

"We're not ready for hospice care," said a defiant Syrbe.

The group has taken inspiration from the international Occupy movements, and maintains a well-oiled media operation, neat camping beds in the rooms of the house and impeccable cleanliness.

The neighbors have been largely supportive, coming by with an encouraging word or a freshly baked cake to keep up morale. Many of the seniors say they have been touched by such signs of solidarity, particularly from young people.

Sven Schwabe, 26, who studies social movements at the University of Duesseldorf in western Germany, raced across the country when he heard about the Pankow project.

"More and more pensioners are taking part in protest movements. But an occupation by seniors is a first," he said.

Their experience could serve as an example, organizers say.

"We get calls from retirees in similar situations asking for advice. We are trailblazers but we will not remain alone for long," Syrbe said.

But while the media coverage of the plucky troupe of squatters has been overwhelmingly positive, some commentators have noted that they enjoy a luxury that debt-mired Berlin may no longer be able to afford.

"Do the angry old Pankowers know that all retirees who come after them will have less in their pockets than they do?" the mass-market local daily BZ wrote on Sunday.

"What world do they live in if they really think that they deserve a palace in the best area of the district to play in? From taxes paid by the younger generation?"