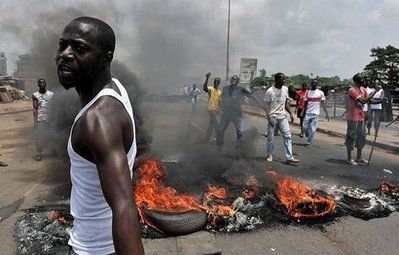 The United States early Sunday called on Ivory Coast strongman Laurent Gbagbo to step down immediately, saying he was pushing the West African nation into lawlessness.

"The United States calls on former President Laurent Gbagbo to step down immediately," Secretary of State Hillary Clinton said in a statement.

"Gbagbo is pushing Cote d'Ivoire into lawlessness," she added. "The path forward is clear. He must leave now so the conflict may end."

The appeal came as heavy artillery fire and explosions shook central Abidjan Saturday on the third day of a fierce battle for the city.

So far, Gbagbo has been brushing off calls by world leaders to step down amid an offensive by troops backing the internationally recognized president Alassane Ouattara in Abidjan.

Reports of carnage and massive displacement meanwhile emerged from the western town of Duekoue where the International Red Cross said 800 died in one day in an incident "particularly shocking by its size and brutality".

The Catholic mission Caritas reported 1,000 were "killed or disappeared" while the U.N. mission gave an initial death toll of 330, accusing fighters from both camps of involvement in the mass killings.

Clinton said the United States was "deeply concerned" by what she called "the dangerous and deteriorating situation" in Ivory Coast, including recent reports of human rights abuses and massacres in the west of the country.

She said both parties in Ivory Coast's conflict bore responsibility to respect human rights and ensure the safety of the country's citizens.

"We also call on the forces of President Ouattara to respect the rules of war and stop attacks on civilians," she said. "President Ouattara's troops must live up to the ideals and vision articulated by their elected leader."