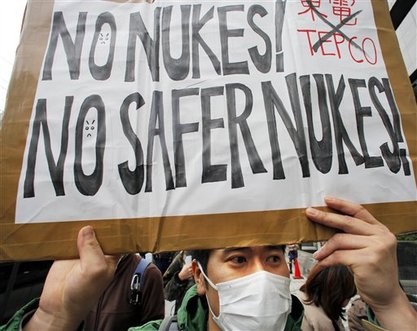 While round-the-clock work continued to prevent a wider catastrophe at the Fukushima Daiichi plant, Tokyo's officials at U.N. climate talks reportedly suggested Japan may have to back off ambitious targets to cut carbon emissions.

Tokyo Electric Power Co (TEPCO), owner of the troubled nuclear site, has been struggling to regain control since a 9.0-magnitude earthquake and ensuing tsunami on March 11 knocked out its cooling systems, leading fuel rods to overheat and threatening a meltdown.

An immediate concern is a radioactive leak into the ocean through a cracked concrete pit, which has continued despite efforts to stem the flow in a pipe upstream with a polymer capable of absorbing 50 times its own volume in water.

"There is no significant change in the amount of water leaking. We haven't achieved the original goal of stopping the water," said a spokesman for TEPCO, Japan's largest power provider.

TEPCO workers started pouring white powder into a tunnel from reactor number two, to ascertain if it is the origin of the contaminant leaking out into the Pacific Ocean, where high iodine-131 levels have been detected.

If the polymer fails to plug the leak, "we will consider solidifying the soil around the pit to prevent water from seeping through," a TEPCO official told a briefing, adding that chemicals might be employed to achieve that.

Since the quake struck more than three weeks ago, throwing Japan into its worst post-war calamity, fears have mounted over the impact on the world's third-largest economy, and a survey Monday suggested the hurt could be massive.

The Bank of Japan said in its Tankan survey that Japanese business confidence is set to plunge in the months ahead.

The central bank's re-release of a quarterly survey from Friday showed the breakdown in the replies it received before and after the disasters.

Friday's report showed business sentiment among large manufacturers improving to "six" in March from "five" in December, but it was predicted to fall to "minus two" in the April-June period.

One of the big question marks is how the Japanese economy will be affected by a looming power shortage, triggered when the quake and tsunami knocked out a sizable portion of the nation's electricity-generating capacity.

The Nikkei business daily reported Monday that the government is considering loosening labor, competition and environmental regulations to promote energy saving this summer.

For example, the government may allow lowered air conditioning at offices, stores, and other public spaces, offering exemptions from a law requiring that room temperatures be kept below 28 degrees Celsius.

The disaster could also require a more fundamental rethink of energy and climate policies in Japan, local media said.

The nuclear accident, will likely force Japan to review its ambitious target of reducing CO2 emissions by 25 percent by 2020 against the 1990 level, according to the reports.

The target is subject to a review, Hideki Minamikawa, vice minister at the Japanese Environment Ministry, told Japanese media in Bangkok on the sidelines of U.N. talks on climate change.

"It is true that the reduction target will be significantly affected" by the nuclear accident, he said, according to the Yomiuri Shimbun.

Japan -- which meets about one third of its energy demand from nuclear power -- has lost some generating capacity from the Fukushima and other accidents, which may in turn lessen public support on plans to build more reactors.

Minamikawa's comment would contradict a remark by Environment Minister Ryu Matsumoto that the government had no plan to change the emission goal.