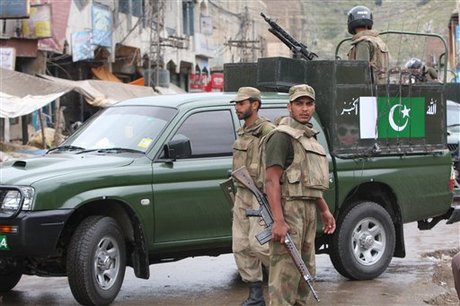 A teenage suicide bomber struck a bus terminal in northwest Pakistan on Monday, killing seven people in the sixth bomb attack in as many days to strike the nuclear-armed country, police said.

The bomb exploded in the small town of Jandol in the district of Lower Dir, 200 kilometers from the capital Islamabad. Pakistani troops fought a major offensive to expunge the Taliban from the area nearly two years ago.

Dir district police Chief Saleem Marwat said seven civilians were killed and 18 wounded at the bus terminal, close to a car showroom, which was also damaged in the blast.

At the car showroom, three people were among the dead and several vehicles damaged, he added.

The Lower Dir administration office earlier said at least five people were killed in the town, which is close to Pakistan's semi-autonomous tribal belt on the Afghan border. Washington calls the region al-Qaida's global headquarters.

Doctor Wakil Khan, head of Lower Dir's main hospital, told Agence France Presse that 15 people had been wounded in the attack, most of them in a critical condition.

Qazi Jamil ur-Rehman, the regional deputy inspector general of police, said security forces were investigating whether there was a link to the tribal belt.

"It was a suicide attack. The bomber was on foot... We're investigating what the target was. This area is close to Bajaur trial district," he said.

More than 4,200 people have been killed across Pakistan in attacks blamed on Taliban and other Islamist extremist networks, which are based in the tribal belt, since government troops stormed a radical mosque in Islamabad in 2007.

Monday's bombing was the sixth in six days. On Sunday, two suicide bombers killed 50 people, unleashing carnage at a Sufi shrine in the central province of Punjab where hundreds had gathered for a religious ceremony.

That attack on the shrine of 13th century Sufi saint Ahmed Sultan, popularly known as Sakhi Sarwar, was the deadliest in Pakistan since a mosque bombing killed 68 people on November 5 in the northwest area of Darra Adam Khel.

"We had 44 dead in our hospital. Six people died on the spot and their families took their bodies directly," said Tariq Mehmood, an emergency ward official at Civil Hospital in Dera Ghazi Khan.

Police and security agencies are questioning a suspected accomplice arrested with a suicide jacket near the shrine and whom police said was injured when a grenade exploded in his hand.

The suspect was identified as an Afghan refugee in his mid-teens from the militant fortress of North Waziristan, also in Pakistan's northwest tribal belt.

The United States considers the area a haven for al-Qaida and Taliban militants who fled the 2001 U.S.-led invasion of Afghanistan to regroup and launch attacks on foreign troops across the border.

U.S. officials want Pakistan to launch a major offensive in North Waziristan, considered the bastion of groups fighting U.S.-led troops in Afghanistan, but Pakistan says its military is too overstretched elsewhere.

Last Thursday, six people including a tribal elder were killed by a bomb in Pakistan's southwestern province of Baluchistan.

A suicide bombing on the same day that targeted an Islamic party chief killed at least 13 people in the northwestern town of Charsadda.

The previous day, another suicide attack aimed at the politician and his supporters killed 10 people in the northwestern town of Swabi.