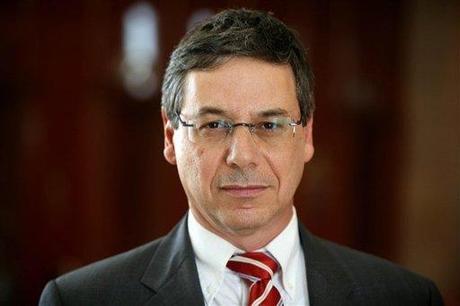 Israeli deputy Foreign Minister Danny Ayalon noted on Friday that the Arab world is passing through a phase that will restore it back to the way it was before World War I, reported Israel Radio.

He also predicted Syria’s fragmentation into provinces, adding that Lebanon will suffer the same fate in the future.

He ruled out the possibility of the emergence of an Arab alliance that would stand in opposition to Israel in the next 10 to 15 years.

After their internal instability, the Arab countries will realize the importance of cooperating with Israel, he added.

Syria has been witnessing anti-regime protests since March 2011.

The regime’s crackdown against protesters has left over 20,000 dead.

A high-ranking Israeli officer supported on Friday Ayalon’s statements, saying that there is a possibility of the formation of a Kurdish province in northern Syria.

There is evidence of this development, he said on condition of anonymity.

He predicted the formation of an Alawite district in the coastal region, which would include the cities of Tartous and Latakia.

Moreover, he said that a Sunni province would also be formed as would a Druze one in Jabal al-Druze.

He also noted that Hizbullah chief Sayyed Hassan Nasrallah is passing through a tense period as demonstrated by the frequency of his speeches in recent weeks.

Not only will it eliminate this filthy militia, but peace with the Israelis will cause confusion in Israel. The only reason for Jewish unity, is a common foe.......the Arabs. I encourage peace!

Israel is so worried now that it's most reliable "enemy" is about to fall, the Golan is no longer the playground of the Israeli rich and famous.

ayalon is reading kissinger plan for the 100th time..and the sionist entity will have another 10 /15 years,what's new danny?we have time.

Google search "new middle eastern map". In 1997, Dick Cheney, who was a senator and chairmen of the council for foriegn relations, came up with this map of the middle east.

He was also the ceo of Halliburton. As vice president, he argued that this step removed any conflict of interest. Cheney's net worth, estimated to be between $30 million and $100 million, is largely derived from his post at Halliburton which was the main contractor in the Iraqi invasion which removed Sunni Iraq and started this Sunni/Shiite war.
He was also a member of the board of advisors of the Jewish Institute for National Security Affairs (JINSA) before becoming vice president.

This is what is happening.... Congratulations to all participants of this plan.... Particularly those middle eastern "allies". (aka Saadadine Hariri)

The Iraq invasion "started the Sunni/Shiite war"??? hahaha.... good one, this shows your intelligence level.

In other words, the satanic beast ayalon is saying: arabs better submit to "israel" or face partiion, division and civil war until the people of the same household will start viewing themselves as seperate identies diffirent from eachother. What is happening in syria is a taste of what could happen.

If bashar el assad cared about syria then he would have stepped down a long time ago instead of giving the zionist scum the opportunity to do what they are doing. Their evil plans are always in action and the arab leaders are as usual to stupid or too selfish from stopping them.

In the bible, Isaiah said: "Thy destroyers and they that made thee waste shall go forth from thee" In simple words: those who will destroy you will come from your own people.
Instead of investing in people's prosperity, leaders are inciting against Israel to cover their own corruption, lack of freedom , low income, unemployment, poverty etc.

Look around you, 1.5 billion Arabs blame a tiny country like Israel that occupies 0.14 percent of all Arabian land, for all their trouble.
The Jealousy in Israel for being a developed country while all Arabs remain behind, the fault is not Israel, its because of Arabian leaders who remain corrupted, lack of democracy, unemployment, no freedom of speech, low standard of life and the incitement against Israel blaming them for all the Arabs' troubles.
Time to grow up, Israel's existence is a fact.
You can either live with them in peace which will contribute to all nations or continue dreaming of wiping out Israel and remain behind.
Your enemy is not Israel the real enemy are the leaders whom inciting against Israel to cover their corruption.
Israel will be more than happy if Lebanon will be united and return to be the Switzerland of the Mediterranean.
A quiet border is for benefit of both nations.

Thanks for admitting that Israel occupies Arab land. As for the rest of your comment, it is dog shit wrapped in hasbara.Why don't you eat your words?

Israel needs to know one thing: give back the territories that they took to their lawful owners, the palestinians, and we the Arabs will take care of our countries. Israel has nothing to say about the Arab world. Israel is a foreign body and should shut up when it's surrounded by a million arab. one day it will find itself puched to accept the inevitable: ceding the occupied territories to its people.

By these kind of statements, they are trying to make us feel there will be a strife.

But there wont. Lebanon wont be divided. We have been through much worse situations. In fact, when Assad falls, the only solution for Hezb is to stretchen out their hands to the rest of the Lebanese. Which they will do.

The question is, will future/saudi movement accept this? or will they try to corner the beast to make it fight for it´s survival and thus, digging the grave of Lebanon?