Brahimi Denies Saying Too Soon for Assad to Go 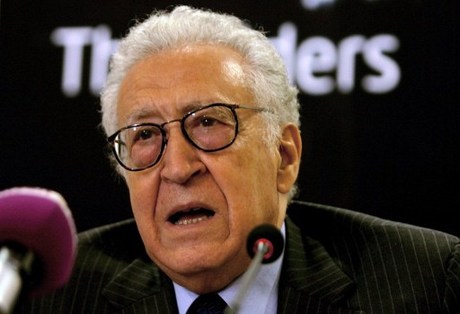 The opposition Syrian National Council and new U.N. peace envoy Lakhdar Brahimi had a run-in on Sunday over whether it was time for Syrian President Bashar Assad to step down.

"The revolutionary Syrian people were shocked and dismayed by Mr. Lakhdar Brahimi's statements," said the exiled opposition coalition, triggering a retort from the envoy.

"We call on the international envoy -- who has not yet consulted with any Syrians on his appointment or his mission -- to apologize to our people for taking this unacceptable position," the SNC said in a statement.

In an interview with Reuters news agency, the veteran Algerian diplomat, named on Friday to replace Kofi Annan who quit, was reported to have said it was too early for him to follow his predecessor in saying Assad must leave office.

"It's much too early for me to say. I don't know enough about what is happening," the news agency quoted him as saying.

In a later radio interview with Al-Jazeera television, Brahimi denied saying it was too soon for Assad to go and called for an apology from the Syrian opposition instead.

"What I have said is that it's early for me to say anything related to the content of this issue. That's what I said," he said, speaking in Arabic.

"Regarding whether Assad has to step down or not, I didn't say that it's too early for him to step down," said Brahimi.

"I ask that (he) apologizes to me," the international envoy said, referring to SNC spokesman George Sabra who reiterated the call for an apology earlier on Al-Jazeera.

Asked by Al-Jazeera if the Syrian leader should quit, the new U.N.-Arab League envoy said: "This is a very big issue. I cannot discuss it on Al-Jazeera or in any other media."

Brahimi said he was on his way to New York for talks with U.N. officials.

His appointment by the U.N. Security Council was welcomed by the West as well as by Assad's traditional allies Russia and China, although the White House said it would be seeking clarifications on the terms of his mandate.

The controversy came as U.N. observers deployed to oversee an abortive peace plan brokered by Annan prepared to wrap up their mission in Syria on Sunday even as violence continued to rage.

More than 23,000 people have been killed in Syria since the uprising against Assad's rule broke out in March 2011, according to the Syrian Observatory for Human Rights. The United Nations puts the death toll at 17,000.