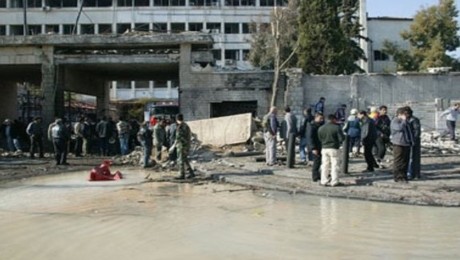 “The Syrian military figure died of serious wounds incurred during the acts of violence that have been raging there since months,” the sources told Russia Today.

The sources also revealed that Syria’s Vice President Farouq al-Sharaa left Damascus more than a week ago and that “he is preparing to announce a government in exile.”

Syria denied Sunday that Foreign Minister Walid Muallem had announced on Twitter he had replaced Sharaa, after speculation about the fate of the regime's most senior Sunni official.

The official SANA news agency said the information was "wrong" and that Muallem did not have a Twitter account. Syrian television last week denied opposition reports that Sharaa had defected, while a deputy minister who fled earlier this year said he was under house arrest.

Later on Monday, Syria’s information ministry denied the report about the death of a high-ranking military official.

A Saudi daily insisted Wednesday it had held an interview with Russian Foreign Minister Mikhail Bogdanov, in which the Russian official purportedly said Syrian President Bashar Assad's influential brother Maher lost both his legs in a bomb attack on top officials in Damascus.

No mention has previously been made that Maher Assad was injured in the attack.

The paper also quoted Bogdanov as supporting a "peaceful transfer of power" from the Assad regime, despite Russia being a staunch ally of the Syrian president.

Responding to the purported interview, a source at the Russian foreign ministry said on Tuesday "this looks like a new media provocation."

Al-Watan on Wednesday then posted online a recording in which Bogdanov supposedly made his comments.

But the taped voice and accent of the man who spoke fluent Arabic sounded different from the voice of Bogdanov in videos available online.

Russian officials have made a series of denials of late about media reports attributed to them.

On August 8, Russian general Vladimir Kuzheyev was reported to have been killed by Syrian rebels. However, he denied these reports himself at a press conference, stating that he was in good health.

Prior to that, Russia's interior ministry also denied issuing confirmation of the Syrian president's death, following the rapid spread of a Twitter message attributed to Interior Minister Vladimir Kolokoltsev saying Assad and his wife had been fatally attacked in western Syria.

The ministry said that Kolokoltsev is an active Internet user but "does not have a single account on any of the social networks."

Agreed Phoenix. BSThrower probably in deep mourning as his beloved murderers slowly but surely fall one by one....

You both are a bunch of idiots. You have no idea what will happen to you in Lebanon if Bashar falls. You are only blinded by the hatred you have for them instead of thinking rationally. I pitty you

Lol gotta love the comments on here that assume all anti-Asad rumors and reports to be 100% confirmed and accurate.

All the leaks from Russia say the dead "Syrian Military Figure" was Maher Al-ASSad. What a great day. No wonder Bashar looked so "out of it" at the Eid yesterday. He is the last of the three boys left and he is next. His mother will die with all of her boys gone. Her evil tongue and black heart will get what it deserves.