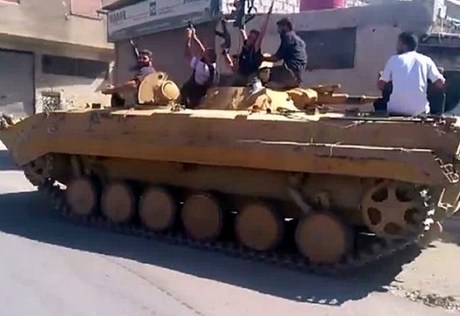 At least 59 people were killed on Monday across Syria, including children, as regime forces backed by combat helicopters battled rebels in a new front in and around east Damascus on Monday, a monitoring group said.

Rebels from the Free Syrian Army claimed to have downed a military helicopter in the district of Qaboon during heavy shelling and fierce fighting that also engulfed nearby Jubar as well as several towns outside the capital.

In the single deadliest incident, 12 people including children died in shelling in the town of Zamalka, according to the Syrian Observatory for Human Rights.

An amateur video distributed by the Britain-based watchdog showed several bloodied bodies, some with their hands bound with rope, lined up on the ground in a small room.

"It's forbidden for the regime to kill us with chemical weapons," said the unidentified activist filming the video, in reference to Western warnings to President Bashar Assad not to resort to his chemicals weapons arsenal.

"But they can kill us with bombs."

"Effectively the army is going from west to east around Damascus, while we are trying to get back into the city, this time in a more organized way," a rebel commander who identified himself only as Selim told Agence France Presse.

The increasing brutal conflict, which had been largely concentrated in the provinces, first hit Damascus with a vengeance last month when fierce battles erupted across the southern belt of the capital.

The regime then launched a major offensive on districts seized by rebels, claiming to have the city back under its control on August 4.

Rebels have since used hit-and-run tactics in the capital, waging what analysts have described as urban guerrilla warfare against the militarily superior but thinly stretched army.

Selim said that after launching a major offensive on the southwestern belt last week, including a "massacre" in the town of Daraya, the army's new focus was the Ghuta area in the countryside east of Damascus.

Ghuta is home to some of the strongest rebel groups, Selim said, including one behind a Damascus bomb attack last month that killed four top security chiefs, including defense minister Daoud Rajha and Assad's brother-in-law, Assef Shawkat, in a major blow to the regime.

In what would be another coup for anti-regime fighters, an FSA brigade claimed it had shot down an army helicopter in Damascus, two weeks after rebels said they had downed a warplane in the eastern province of Deir Ezzor.

"It was in revenge for the Daraya massacre," a spokesman for the rebel Badr Battalion, Omar al-Qabooni, told AFP via Skype.

He said the rebels had found the body of the pilot after the chopper plummeted to the ground in a ball of flames.

State television said only that a helicopter crashed near a mosque in Qaboon without giving the cause.

Rebels also attacked several army checkpoints, and killed at least six soldiers in a bomb attack on a military vehicle in the Ghuta area, the Observatory said.

The escalation in east Damascus comes after the Observatory said at least 334 people were killed in a ferocious five-day onslaught of shelling, summary executions and door-to-door raids in Daraya in the southwest.

The Sunni Muslim town was overrun by troops battling to crush the insurgency both in the city and the countryside used by rebels as rear bases, by cutting of their supply lines, opposition militants said.

In Syria's other key battleground in the north, regime forces pounded the Izaa district of the main city of Aleppo, the Observatory said, reporting a nationwide toll on Monday of 59.

"Regime forces are trying to take control of the district," it said, while state television claimed the army had "cleansed" the neighborhood.

The army was also bombarding several besieged districts of the central city of Homs, which has faced near constant shelling for more than two months, the Observatory said.

"The bombing is so violent, whole areas are being destroyed, yet nobody cares about Homs anymore," an activist in the rebel-held Old City said.