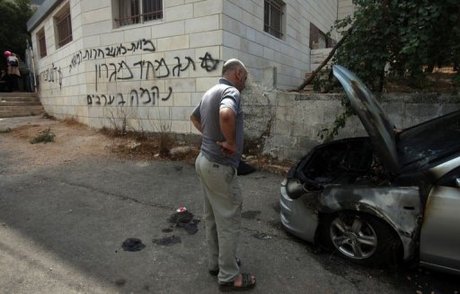 Vandals believed to be Jewish extremists on Wednesday torched a car and sprayed anti-Arab graffiti near a refugee camp near Ramallah, an Agence France Presse correspondent and police said.

The incident took place between Jalazoun refugee camp and Dura al-Qara village, both of which lie very close to Beit El settlement.

But the perpetrators were believed to be extremists linked to the nearby settler outpost of Migron which is facing imminent evacuation.

The attackers torched a Hyundai car, gutting its front end, and poured gasoline over two others, but did not manage to set them alight, the correspondent said.

Nearby, Hebrew graffiti read "Migron" and "Death to Arabs" and linked the attack to the upcoming evacuation of the outpost: "Hi from those who are being deported," it said.

Israeli police confirmed that a car had been torched and anti-Arab graffiti sprayed nearby, while the army said troops had found graffiti reading: "Migron price tag" and other hateful slogans.

Visiting the site, Ramallah governor Leila Ghanam accused the Israeli authorities of complicity with the perpetrators.

"These people are protected by the army," she said. "There are a lot of cameras around settlements which are guarded by the army -- the settlers can't do anything without protection from the army."

"Price tag" is the euphemism for a hate crime by Jewish extremists which for the most part target Palestinians and Arabs in response for state moves against settler outposts.

The incident came a day after Israel's High Court met to discuss plans to evacuate Migron, the largest and oldest outpost in the West Bank which is due to be razed by virtue of a supreme court order dating back to August 2011.

At the hearing, the state prosecutor's office said the outpost should be evacuated in the next few days, but the judges are still mulling a response to two settler petitions to head off the move.

"Price tag" attacks tend to involve the wanton destruction of property and have included multiple arson attacks on cars, mosques and olive trees, although the perpetrators are rarely caught.