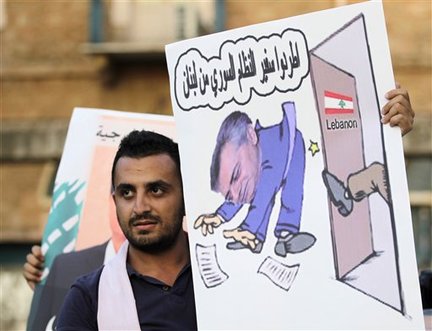 The Progressive Socialist Party on Friday staged a demonstration demanding the expulsion of Syrian Ambassador to Lebanon Ali Abdul Karim Ali and the summoning of the Syrian officers who are “involved” in the case of former minister Michel Samaha.

Members of the party’s youth organization gathered at 7:00 p.m. at the Samir Kassir Garden in downtown Beirut under the slogan “In rejection of the massacres being committed against the Syrian people.”

The demonstrators carried the flags of Lebanon, the PSP and the Syrian revolution, in addition to banners that read, “The Spring of Damascus Will Inevitably Arrive”, “Syria and Lebanon are Two Peoples Against the Same Regime,” and “The Expulsion of the Ambassador is a Lebanese Duty towards Syria’s Children.”

The youth organizations of the March 14 forces on Wednesday also held a demonstration outside the foreign ministry to demand Ali’s expulsion and criticize the performance of Foreign Minister Adnan Mansour.

The PSP protesters chanted against the Syrian regime and its symbols and hailed PSP leader MP Walid Jumblat’s stances, amid strict security measures taken by the army and the Internal Security Forces.

“Before the failure of the international community to shoulder its responsibilities in protecting the Syrian people and out of our keenness on confronting the schemes targeted against Lebanon’s security and stability … we today scream in the face of the killing machine that is targeting the Syrian people,” said Ayman Kamaleddine, head of the Progressive Youth Organization.

He also called on the Lebanese state to “take the necessary diplomatic measures against the Syrian ambassador, the representative of the murderer regime in Lebanon,” stressing the need to “summon the Syrian officers who are involved in Michel Samaha’s case and submit the results of the investigations to the Arab League and the U.N.”

Lebanese authorities have charged Samaha, Syrian security chief Major General Ali Mamlouk and a Syrian colonel identified as Adnan with plotting bombings and assassinations in the northern region of Akkar.

where is FT and his M8 gang to condemn this?.. like they started making fun of the kataeb/leb forces/future demonstrations before...

Impeach Mansour in Parliament for failing to exercise his duty.