UNIFIL Says Govt. Can Seek Its Help in Controlling Syria Border under 1701 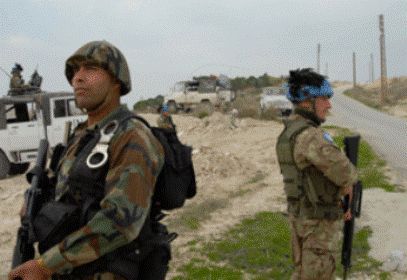 The United Nations Interim Force in Lebanon (UNIFIL) on Tuesday noted that it can help Lebanon control its border with Syria should the Lebanese government make such a request.

Commenting on media reports about a possible deployment of UNIFIL peacekeepers on the border with Syria, UNIFIL spokesman Andrea Tenenti said UNIFIL’s deployment and missions were specified by the U.N. Security Council and approved by Lebanon’s government, noting that UNIFIL’s area of operations was defined by U.N. Security Council Resolution 1701 which ended the 2006 war between Israel and Hizbullah.

Tenenti clarified that UNIFIL’s mission is still limited to its area of operations between the Litani River and the U.N.-demarcated Blue Line, in coordination with the Lebanese Armed Forces.

The spokesman noted that UNIFIL’s mission is focused on the cessation of hostilities between Lebanon and Israel.

He said Resolution 1701 calls upon the Lebanese government to secure its borders and other entry points to prevent the entry, without its consent, of arms or related material.

Tenenti said the resolution authorizes UNIFIL to assist Lebanon in controlling its borders, noting that only Lebanon’s government can make such a request.

He added, however, that UNIFIL was not aware of any official request in that regard.

Earlier on Tuesday, the March 14 forces submitted a memo to President Michel Suleiman demanding the annulment of the security treaties with Syria, the expulsion of the Syrian ambassador, the filing of a complaint with the Arab League over Syria’s violations and reporting the breaches to the U.N. Security Council.

Shelling from Syria into Lebanon and cross-border shootings have become near-daily occurrences in recent months according to Lebanese officials, and the spillover of the conflict has worried the international community.

President Michel Suleiman accused Syria of violating Lebanese territory on July 23, and the Syrian regime has frequently blamed Lebanon for allowing "terrorists" to cross over and smuggle weapons into the strife-torn country.

Why not, until Bachar falls for good.

That would be a good thing, it would protect our eastern borders, prevent attacks from either side, cement the fact that Syria is enemy teritory, save lives, augment UNIFIL tourism... But I dont think the military wing of the mokdads will accept. We have to take their opinion.

Syria have been smuggling heavy weapons into Lebanon for years. returning the favor