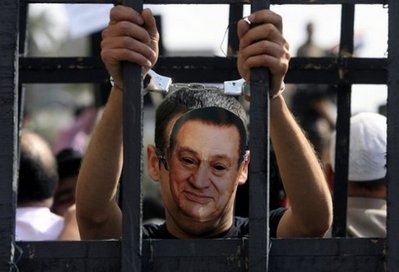 Egypt's ex-president Hosni Mubarak has been placed in detention for 15 days, prosecutors said Wednesday shortly after state media reported his two sons had also been detained.

In a statement on the public prosecutor's Facebook page, a spokesman said the prosecutor Abdul Maguid Mahmoud authorized the detentions "as part of an inquiry into the use of force against protesters during the unrest in January and February."

Mubarak was admitted to hospital on Tuesday in the Red Sea resort of Sharm el-Sheikh shortly after suffering a heart attack during questioning by prosecutors, state media said.

It was not immediately clear where his 15-day detention would take place.

"It has been decided to imprison Gamal and Alaa for 15 days for the needs of the inquiry," the report said.

They are accused of incitement to fire at demonstrators during a popular uprising that lasted from January 25 till February 11 when Mubarak reluctantly stepped down. Nearly 800 people died during the uprising.

A security source said the two brothers were heading for the Tora prison in Cairo from the Red Sea resort of Sharm el-Sheikh where they were interrogated.

On Sunday, public prosecutor Abdul Magid Mahmud ordered the inquiry, as part of a sweeping probe into corruption and abuse.

The Mubaraks were to be asked about allegations that they were "connected to the crimes of assault against protesters, leading to deaths and injuries", the official MENA news agency said.

Prosecutors had begun questioning Mubarak and his son Gamal earlier on Tuesday, Justice Minister Abdel Aziz al-Guindi said, adding that the questioning over acquiring wealth illegally had not yet started "as that will be handled by the department of illicit gains".

State television reported that Mubarak had refused to eat or drink since he received news on Tuesday morning that he was to be questioned.

He was admitted by his bodyguards to the VIP wing of the Sharm el-Sheikh International Hospital, the report said, adding that the hospital was not accepting any patients except for emergency cases.

The prosecutor's summons came after the broadcast of an audio tape in which Mubarak defended his reputation and after weeks of mounting protests calling for him to be put on trial.

In the audio message aired on the pan-Arab television network Al-Arabiya, Mubarak complained he was the victim of a smear campaign.