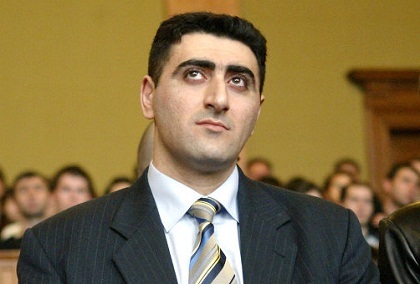 Bitter enemies Azerbaijan and Armenia traded accusations on Friday amid growing international criticism of Baku's pardoning of an extradited Azerbaijani soldier who had hacked an Armenian to death.

Ramil Safarov was pardoned, promoted and financially rewarded after being extradited to Azerbaijan from Hungary, where he had been serving a life sentence for killing the Armenian soldier with an ax during a NATO training session in 2004.

Visiting Baku, where Safarov received a hero's welcome on his return a week ago, NATO Secretary General Anders Fogh Rasmussen said the murder was "a crime which should not be glorified".

But Azerbaijani President Ilham Aliyev remained defiant, saying the pardon was legal and fair despite the NATO chief's comments, which followed similar criticism from the United States, the European Union and Russia.

"Armenia is unjustifiably kicking up a fuss over Ramil Safarov's pardoning," Aliyev said at a news conference with Rasmussen in Baku.

"Safarov has been extradited in conformity with the European Convention (on the Transfer of Sentenced Persons) and his pardoning is based on Azerbaijani legislation," he said.

As tensions simmered between the ex-Soviet neighbors that fought a territorial war in the 1990s, Armenian President Serzh Sarkisian accused energy-rich Azerbaijan of flexing its muscles in front of the international community.

"We believe that the purpose of pardoning and justifying the murderer is not just that Aliyev wants to improve his image inside the country, but to try to test the international community's reaction to Azerbaijan's absurd move," Sarkisian said in comments released by his press service.

Azerbaijan and Armenia have not yet signed a final peace deal since the 1994 ceasefire in their war over the disputed region of Nagorny Karabakh, and shooting is still frequent along the front line.

NATO's secretary general warned against any new outbreak of hostilities.

"Two things are clear. First, that there is no military solution. And second, the only way forward is through dialogue, compromise and cooperation," Rasmussen said.

The United Nations on Thursday also voiced concern about heightened tensions between the regional foes, saying "there is no alternative to a peace settlement" over Nagorny Karabakh.

The row over the pardon has seen Yerevan break off links with Budapest, which had been assured by Baku that the killer would serve out his prison term in Azerbaijan.

Further infuriating Armenia, Aliyev's website has been publishing a series of letters from citizens congratulating him for freeing the killer.

"The extradition and pardoning of national army officer Ramil Safarov has filled us, young people, and indeed the entire nation with a sense of pride and joy," said one letter from youth club manager Kifayat Amirova in the city of Ganja.

Safarov's lawyers claimed in court that he was traumatized because his family became refugees during the Nagorny Karabakh war, and alleged that the man he killed had insulted his country.

Armenia-backed separatists seized Nagorny Karabakh from Azerbaijan during the war which left some 30,000 dead and drove around a million people from their homes.

Baku has threatened to take back the disputed region by force if long-running peace negotiations do not yield results, while Yerevan has vowed massive retaliation against any military action.

What kind of country calls its cowardly killer a Hero? Azerbaijan, of course. We are ready for war Mr Alyev. You lost once, you will loose again.

Complete Fail as an article...You should have been read alot before writing such an article..

Who now will believe any international agreement Azerbaijan puts its signature to? NO-ONE.

He killed someone with an axe while he slept? How brave is that?! WELCOME TO AZERBAIJAN, a country full of barbarian "heroes"