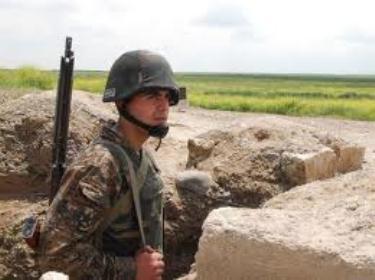 An Azerbaijani soldier who was shot by an Armenian sniper in the ex-Soviet state's remote Nakhchivan region in July has died in hospital, the defense ministry in Baku said Saturday.

The ministry said the soldier, whom it named as Rabbi Jafarov, died late Friday.

"He was wounded in the head on July 13 by a sniper shot from the Armenian side," the ministry's statement said.

Jafarov was the 14th soldier reported to have died this year amid firefights between Armenian and Azerbaijani troops, who are locked in a bitter unresolved conflict over the disputed region of Nagorny Karabakh, where they fought a war in the 1990s.

The Armenian defence ministry has denied shooting the soldier in Nakhchivan, an Azerbaijani exclave that borders Armenia.

The announcement came amid heightened tensions between the ex-Soviet foes sparked by Azerbaijan's pardon of a soldier who axed to death an Armenian serviceman, which drew criticism from the U.S., EU, Russia and NATO.

Ramil Safarov was pardoned, promoted and financially rewarded last week after being extradited to Azerbaijan from Hungary, where he had been serving a life sentence for killing the Armenian soldier during a NATO training session in 2004.

Armenia-backed separatists seized Nagorny Karabakh from Azerbaijan in during the war that left some 30,000 people dead, but despite years of negotiations since a 1994 ceasefire, the two sides have not yet signed a final peace deal.

Azerbaijan has threatened to take back the disputed region by force if negotiations do not yield results, while Armenia has vowed massive retaliation against any military action.