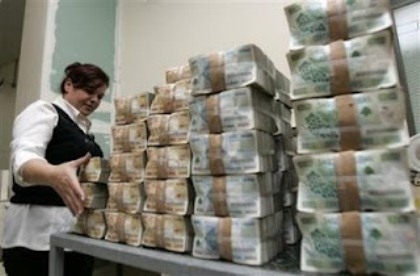 Despite the dilemma over the funding of the new wages scale, the salaries hike wasn't limited to public sector employees but also reached the salaries and compensations of the three top presidential posts of the country, the ministers and the parliament members, As Safir newspaper reported on Tuesday.

According to the report, the president, the speaker and the premier will collectively have an increase of around LL 6,200,000 while the ministers and MPs will be allocated around LL4,300,000, where the state's treasury will have to hold a burden of around LL8,300,000,000 each year.

This hike in the officials' salaries raises several questions amid the financial crisis that the country is passing through as the hike is given to them even if they quit their posts.

Economy and Trade Minister Nicolas Nahhas told Voice of Lebanon radio (93.3) that the new wages scale for all public sectors ranged between 40-60 percent.

“It was equally distributed between everyone,” he told the radio station.

Nahhas noted that the government is only concerned about maintaining the country's inflation rate and balance of payments.

“The matter is difficult and complicated as we have never witnessed such a hike in salaries before,” the minister added.

The cabinet approved last week the new salaries scale for public employees ending a long dispute that had prompted the Syndicate Coordination Committee, a coalition of private and public school teachers and public sector employees, to hold several sit-ins and strikes.

The government's wages increase will be retroactive from July 1, 2012, but the salary adjustments would be paid in installments over a period of five years.

The state’s treasury will have more than $1.2 billion to cover as there are over 180,000 public sector employees including military personnel.

The government plans to boost the treasury’s revenue to cover the expenses of the salaries boost through several proposals including the implementation of a hike on taxes on land parcels and sea properties.

The public should agree on including the officials in the wage increase, under one condition. Stop exploiting the public money and consume millions of dollars (that not a human can find where the money did go) for your own use. Then, you guys are more than welcomed to include yourselves in the hike. I'm sure they will pick both cause they are greedy Bastards.

I am not against increasing the salary for the ministers and president. The problem is that there is too many of them. Singapore is the least corrupt gouvernment on earth and its president makes the highest salary by far. 2million USD per year.
The morale: get less ministers. Pay them more, way more. But for heaven's sake stop paying them when they leave the ministry! it is a public service job, not a bond!!!