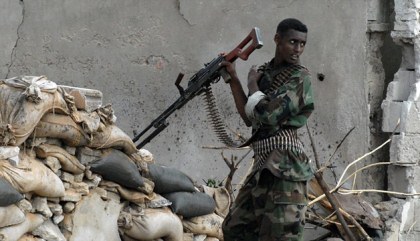 The Kenyan army said Friday that it has taken the southern Somali port city of Kismayo, the last stronghold of the al-Qaida linked Shebab, a claim dismissed by residents and the insurgents.

"Kismayo has fallen and with minimum resistance," Kenyan army spokesman Cyrus Oguna told Agence France Presse, even as several residents said that fighting was ongoing and the Shebab still controlled the city centre.

"It was a joint operation both on air and ground, we finally entered Kismayo at 2:00 am (23:00 GMT Thursday)," said Kenyan army spokesman Cyrus Oguna.

"We cannot give casualty figures at the moment; the damage has not been assessed," Oguna told AFP, insisting that Kenyan forces were inside the town.

However, the rebels and city residents said the Kenyan troops were still on the outskirts of the city that they have been targetting for days.

A Shebab commander in Kismayo also denied that soldiers had entered the city.

"The enemy using military boats have deployed hundreds of soldiers on the coast late last night and the mujahedeen fighters are engaging in heavy fighting with them now," said Sheik Mohamed Abu Fatuma.

"They are not very close to the city because the coast where they are now is around nine kilometers from downtown," he said.

Several Kismayo residents also said the Kenyan forces were still on the beach, where they came ashore from two ships escorted by helicopter gunships around five kilometers from the city centre.

"The city itself is still under control of the Shebab. Radio Andalus is operating and calling on people to join the jihad and overthrow the invaders," one resident, Abdulahi Yakub, told AFP.

Kismayo is the last major bastion of the Shebab, who have lost most of their other strongholds to the 17,000-strong African Union force -- of which Kenya is a part -- as well as allied Ethiopian forces.

Kenyan troops have been aiming to take Kismayo ever since they rolled troops and tanks across the border to fight the Islamist extremists almost a year ago. Reaching their goal has taken them longer than anticipated.

Kenyan forces have been targetting the port for days and on Tuesday fighter jets bombarded the city's airport.

The key Shebab-held towns of Afgoye, Baidoa and the port of Marka have all fallen in recent months.