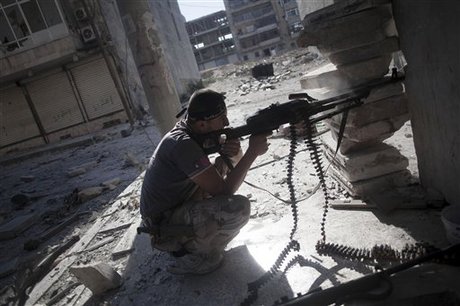 Rebels unleashed an unprecedented barrage of mortar fire against troops in Aleppo after announcing a "decisive" battle for Syria's second city, residents and a watchdog say.

Shells crashed down at a steady rate and clashes were widespread, leaving layers of dust and smoke over Aleppo, according to the residents and the Syrian Observatory for Human Rights.

"The fighting is unprecedented and has not stopped since Thursday. The clashes used to be limited to one or two blocks of a district, but now the fighting is on several fronts," the Observatory's Rami Abdel Rahman told AFP.

Residents of neighborhoods previously spared the worst of the two-month-old battle for Aleppo also told AFP the violence was "unprecedented".

"The sound from the fighting... has been non-stop," said a resident of the central district of Sulimaniyeh, who identified himself only as Ziad. "Everyone is terrified. I have never heard anything like this before."

Rebels claimed they had advanced on several fronts, particularly in the southwest, but admitted they had failed to make any significant breakthrough.

"On the Salaheddin front, we took one of the regular army bases," said Abu Furat, one of the leaders of the Al-Tawhid Brigade, the most important in the city.

But he admitted that the fighters had to retreat from Salaheddin because they were outgunned. "To win a guerrilla street war, you have to have bombs and we don't," he said.

Abu Furat said that 25 soldiers were killed in the assault, while another rebel fighter said 20 of his comrades died on the battlefield and 60 were wounded.

The Observatory which gave initial estimates of 60 people killed across the country on Friday -- half of them civilians -- said at least five civilians and five rebels died in Aleppo.

"We heard soldiers on their radio calling their chiefs to ask for reinforcements. They were crying and saying 'we are all going to die,'" a rebel said.

By Friday afternoon the intensity of the fighting abated, as rebels appeared to focus their attention on other objectives, such as Omayyad Mosque in the center of the Old City, an AFP correspondent said.

The Observatory's Abdel Rahman said the fighting was not yielding major gains for either side: "Neither the regime nor the rebels are able to gain a decisive advantage."

The outgunned rebels, a rag-tag army made up of mutinous soldiers and civilians who have taken up arms to oust President Bashar Assad's regime, declared an all-out assault for Aleppo on Thursday.

Afterwards, an AFP correspondent said mortars were fired about every 15 minutes into army-held areas, including Sulimaniyeh and Sayyid Ali.

"One mortar round hit a residential building and killed four people from the same family, including an old man and a young child. We tried to carry them away to bring them to the hospital but they were already dead," one resident said.

Violence also raged in Damascus where troops attacked several rebel areas in both the north and the south of the capital, leaving three civilians dead, the Observatory said.

Despite the violence, thousands of protesters took to the streets of Aleppo and other cities in support of the unification of the Free Syrian Army as factionalization appears to undermine the anti-regime revolt.

The Observatory said demonstrations were held after the main weekly Muslim prayers in the Fardus and Sukari neighborhoods of Aleppo, as well as in the central province of Homs, Hama further north and Idlib in the northwest.

The conflict has dominated proceedings at the U.N. General Assembly in New York, where U.N. and Arab leaders expressed concerns the country could become a "regional battleground."

U.S. Secretary of State Hillary Clinton, meanwhile, prepared to host a meeting of the "Friends of Syria" group at which Syrian activists will urge world leaders to do more to help people caught up in the conflict.

And Sergei Lavrov, the foreign minister of Russia, which has repeatedly blocked U.N. Security Council action against its longstanding Syrian ally, was to address the General Assembly.

it is a crime against humanity to bomb civilian zones by the army....and against all the international laws. but it seems that bashar prefers shelling residential areas rather than israel : much easier for him!and so much braver!
and with the benediction of his M8 collabos in lebanon....

you lack ideas my poor friend. so easy to copy paste instead of argumenting.... but we know how low M8 supporters IQ is...

there is a big difference between an ARMY shelling its own citizens and civilians fighting for their freedom in case you don t know....

but you seem to share the same cowardness as your bashar friend....

ask yourself whose fault it is....

oh! look little boy is getting angry... i guess you would find it normal if the lebanese army shells dahiye? that is your idiotic logic...
i guess you supoort the slaughtering of children by an army...
if people are resisting poor stupid it is because your friends butchered them while they were demonstrating pacifically!

but as a courageous little M8 sheep you are i guess you wouldn t resist the army in such cases because it is bad as you deny syrians to resist the butchery!

but what to expect from people who thanked syria that has harmed lebanon more than israel ever did and dare call themselves "resistants"!! hahaha such a joke....

oh! and istezzz: no wonder you support the bashar regime as you thanked them for all the good things they did in lebanon and harmed the country more than israel...

and other thing: isn t it funny how hezbos help the shabbihas but no one to help the lebanese army in nahr el bared!!!! we see how much you care for lebanon... so please you comments are totally void....

oh! and the girlie tells you that one who labels himself as istezz seems amal to me thus supporting your friend bashar....

Berri, a longtime ally of Syria in Lebanon, said the explosion was intended to deliver a blow to the core of the country’s leadership in a bid to dismantle “the Syrian Arab Army” which he said was the “guarantor of the country's unity and stability.” NB

About the Syrian Top Official Bombing :)

Yeah good job guys Aleppo is going to turn into rubbles after the free syrian army unleash their American weapons bought CASH buy Saudi Arabia and Qatar ... Its all in the open .. We fight and kill each other .. Slaughter each other while the world goes by ... Who has advanced the most in the past 20 years ... Electricity comes sometimes 2 hours a day in Lebanon .. Why Assad and not in Bahrain Saudi Arabia and rest of our Royal HIGHNESS Kings and Queens of the KINGDOMS ........lest not forget Jordon ... they and America are one ... No to anyone controling our internal affairs ... Free Saudi Arabia .... Long live the true freedom ... I hope i dont die before i see the Saudi family grab each others necks ..free bahrain why the silence on the gulf countries .. Why ? Why not the importance to the Bahraini cause .... No to war Yes to Advance ...

I think we all feel slightly stupider after reading your post. Perhaps you can do us all a favorite and move back to Iran.