More Than 130 Dead in Syria amid Clashes in Aleppo Souk 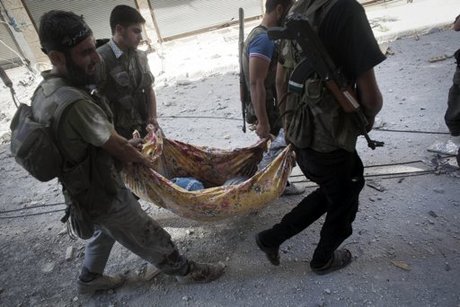 On the political front, Syria accused Washington of seeking to topple the Damascus regime by raising fears over its chemical weapons stockpiles and creating a scenario similar to that which led to the invasion of Iraq.

The Syrian Observatory for Human Rights said an air strike on the town of Salqeen in the mostly rebel-held province of Idlib bordering Turkey killed 21 people, including eight children.

The Britain-based watchdog also said at least 18 soldiers were killed in Homs province of central Syria, in a rebel ambush and bombing of their convoy on the Damascus-Palmyra highway.

Meanwhile, the Local Coordination Committees, a key activist group monitoring the situation on the ground, said regime forces killed 115 people across the country, among them women and children.

In a video released by activists from Salqeen, a number of the air strike victims are seen piled in the back of a pick-up truck, their bodies charred black with limbs torn off.

"My God, my son is dead," a man wails as he looks on at the bloody disfigured corpses, finally putting his hand over his eyes.

According to Observatory director Rami Abdel Rahman, among the dead were three children from the same family.

In another video, the bodies of three small children, probably the same ones, are shown lying on a bedsheet with their faces bloody and mutilated. "These children are from one family," a man tells the activist filming.

The Observatory also reported regime shelling in the provinces of Hama, Daraa and Homs.

The group, which relies on its information from a network of activists and medics on the ground, gave an initial toll of 59 people -- 34 civilians, five rebels and 20 soldiers -- killed in violence across Syria on Monday.

An Agence France Presse correspondent in Aleppo, meanwhile, said rebels and regular soldiers traded fierce machinegun fire in and around the historic souk, which reverberated across the centuries-old UNESCO-listed covered market.

The fighting, which took place in an area of the souk facing Aleppo's ancient citadel, came after parts of the market were ravaged by a fire, sparked by fighting, on Friday night and Saturday.

Traders told AFP that the army had no presence inside the souk area, which has been infiltrated by rebels.

Because of the clashes, it has not yet been possible to evaluate the damage to the ancient site caused by the fire, which has dealt an economic blow to residents of Syria's second city and traditional commercial hub.

The regime and rebels exchanged blame for the weekend damage to the souk.

"Armed terrorists started the fire in order to cover up for their looting and theft in the market," Aleppo governor Wahid Akkad told an AFP journalist in the city.

However, video posted on YouTube by activists showed rebel fighters trying to put out the fire with a water hose. "We are certain that it was regime fire that started the flames," an anti-regime citizen journalist told AFP.

As the fighting raged, Foreign Minister Muallem hit back at assertions by U.S. Defense Secretary Leon Panetta on Friday that the Syrian regime had moved some chemical weapons to safeguard the material as it battles the rebels.

"This issue (chemical weapons) is an invention of the American administration," Muallem said in excerpts of an interview with Beirut-based Al-Mayadeen TV.

But Muallem remained vague on whether President Bashar Assad's regime possesses chemical weapons, despite Damascus acknowledging in July that it has such stockpiles.

"These chemical weapons in Syria, if they exist -- and I emphasize if -- how is it possible that we would use them against our own people? It's a joke," he told the staunchly anti-American and anti-Israeli channel.

"It is a myth they invented to launch a campaign against Syria like they did in Iraq," he said in the interview given on the sidelines of the U.N. General Assembly meeting in New York.

A U.S.-led coalition invaded Iraq in March 2003, accusing Saddam Hussein of possessing weapons of mass destruction. No such weapons were ever found.

NATO head Anders Fogh Rasmussen said on Monday that Syria's chemical weapon stockpiles were a "great concern" but the solution to the conflict remained political, not military.

He told a briefing in Brussels that there were no discussions on military options as "the right way forward as regards Syria is a political solution."

At least 30,000 people, including more than 2,000 children, have died in the conflict since it erupted in March 2011, according to figures supplied by the Observatory.

The butcher assad is doing what he does best...killing people...

He has taken it to another unacceptable level using air strikes. Last time we saw this done by Gaddafi....the allies jumped in. This is a clear sign that the world must not sit back and watch this murderer butcher the people and children of Syria!

Silly you. Don't you realise that the West won't jump in. There are no huge oil fields in Syria.

Its time for all Assad allies to be treated as murders as they are colluding in the tragedy and can longer hide behind political ideology.

can anyone tell me what the black bandana of the rebel fighter (in the pic on far left says) rip to the victims.

"how is it possible that we would use them against our own people?"

the same way you use heavy weaponry against your people and butcher them against all international laws...with the benediction of M8! but not a single shot in the golan against israel...