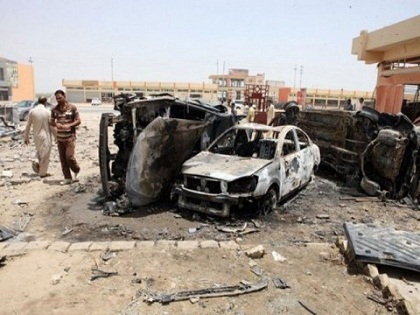 September was the deadliest month in Iraq in more than two years, with 365 people killed in violence that Iraqi security forces are struggling to curb, official figures released on Monday showed.

Insurgents are regarded as weaker than when violence reached its peak in 2006 and 2007, but they remain capable of carrying out mass-casualty attacks across Iraq.

The statistics compiled by the Health, Interior and Defense Ministries showed that 182 civilians, 88 police and 95 soldiers were killed in attacks in September.

It was the highest monthly toll given by the government since August 2010, when figures showed 426 people were killed and 838 wounded in attacks.

The previous deadliest month this year was July, when 325 people were killed in attacks, according to official figures.

The worst violence of the month occurred on September 8 and 9, when a wave of more than 30 attacks killed at least 88 people and wounded more than 400.

Sunday was the second-deadliest day in September, with at least 33 people killed and 106 wounded in attacks, which occurred in Baghdad and the nearby areas of Taji, Madain and Tarmiyah, and also hit Kut, Mosul, south of the northern oil city of Kirkuk, and areas around Baquba.

In Baghdad's central Karrada district, a suicide bomber detonated an explosives-packed car, scattering debris for dozens of meters (yards) from the site of the blast, shattering store windows and smashing cars.

A headless, limbless torso surrounded by pieces of flesh lay at the scene.

"I was in my shop and I heard the sound of a very powerful explosion," said a store owner who gave his name only as Abu Ihab. "Dust was everywhere."

"We were sitting in the shop while police were collecting flesh," he said. "Human flesh was on the sidewalk, being collected and put in plastic bags."

"When the explosion happens, it does not care about any security measures," he said. "I sit in my shop and I am afraid for my life."

The deadly violence in Iraq and a lack of basic services are two of the main complaints against the government.

September also saw a brazen prison break in the city of Tikrit in which 102 inmates, among them 47 alleged Al-Qaida members who had been sentenced to death, managed to escape, according to the interior ministry.

The ministry said that weapons had been smuggled into the prison during family visits, and that inmates were also able to seize a guard's weapon, and take others from an armory.

The inmates launched an uprising in the prison on Thursday, temporarily taking control of the facility.

Two high-ranking police officers also reported that militants outside the prison detonated explosives at the facility's perimeter to aid the escape.

Out of the 102 fugitives, four had been killed and 23 captured as of Friday night, according to the ministry, which also said that 16 security forces members were killed in clashes related to the incident.

Al-Qaida front group the Islamic State of Iraq said in July that it was launching a "new military campaign aimed at recovering territory."

An earlier message posted on jihadist forums said the ISI would begin targeting judges and prosecutors, and try to help its prisoners break out.

Iraqi security analyst Ali al-Haidari said that factors contributing to the violence include the security forces' lack of surveillance equipment, and "weakness on the intelligence side."

Haidari also cited "financial and administrative corruption in some parts of the security organization," and political differences between Iraq's executive and legislative branches that leads to delays in security legislation.

There are indications "that there is a problem in the lack of readiness of the security organization and a weakness in military abilities and a lack of training," political analyst Ihsan al-Shammari said.

He also said that "these explosions have become a way to pressure and increase the political and security conflict."

Iraq has been hit by a series of intertwined political crises since the end of last year that have pitted Prime Minister Nouri al-Maliki against various opponents, and paralyzed the Iraqi government.