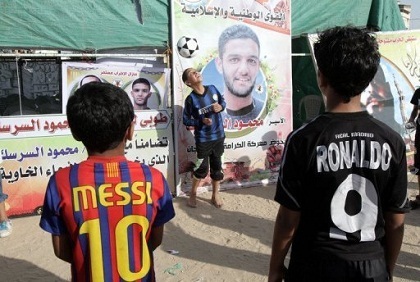 A Palestinian footballer who went on a hunger strike in an Israeli jail said Monday he is turning down an invitation to see Barcelona play Real Madrid in El Clasico after an Israeli soldier was also asked to attend.

Mahmud Sarsak, who went on hunger strike earlier this year to protest his detention without charge by Israel, was invited to the match by Barcelona, after they also extended an invitation to Gilad Shalit, an Israeli soldier who was held captive in Gaza for more than five years.

"I apologize to the fans and to the management of the club for not attending because of the invitation to Gilad Shalit," Sarsak told a news conference at the headquarters of the Red Cross in Gaza City.

Last week, Barcelona said it had agreed to invite Shalit, a football fan, to the game against Real Madrid, drawing the ire of Palestinian groups.

The next day, the Catalan club said it had also invited the president of the Palestinian football federation, Jibril Rajub, the Palestinian envoy to Spain, and Sarsak to the clash.

Sarsak initially said he would consider attending the game, if he was granted permission by the Palestinian Authority, and so long as he was not seated next to Shalit.

But on Monday, Sarsak said it would be unacceptable for him to attend a game along with Shalit.

"The invitation to Gilad Shalit suggests an equivalence between the Zionist executioner and the Palestinian victim, and means I cannot attend," he said.

"There is a difference between a person arrested with his weapon, in military uniform from inside his tank... and the arrest of an athlete at a crossing who was on his way to a professional sports club in the West Bank," he said.

Shalit was captured by Gaza-based Palestinian militants in a 2006 cross-border raid and held incommunicado until October 2011, when he was released as part of a prisoner exchange that saw Israel free 1,027 Palestinians.

Sarsak was arrested in July 2009 while on his way from Gaza to sign for a West Bank club and was held without charge by Israel.

He was freed in July after a hunger strike of nearly three months while in an Israeli jail. His protest triggered concern from world footballing body FIFA and human rights watchdog Amnesty International.

Both Barcelona and Real Madrid are massively popular among Palestinians in the West Bank and Gaza, and Sarsak said he would be happy to receive a future invite from Barcelona or any other Spanish club.

"I announce my readiness to meet Barcelona or any other Spanish club outside of the context of a joint invitation with Gilad Shalit, inviting me as a Palestinian athlete who experienced... the suffering of a hunger strike for freedom and dignity," he said.

The ruling Hamas government in Gaza had reacted furiously to Barcelona's decision to invite Shalit to the October 7 game, urging Muslim broadcasters not to show the game if the Israeli attended.

"We call on all Muslim, Arab and Palestinian media not to broadcast this game if Shalit attends," Hamas spokesman Sami Abu Zuhri said on Friday.

"FC Barcelona's invitation to the criminal Shalit so they can pay homage to him is an offense to sentiments of the Palestinian people and to Arabs and Muslims, because Shalit is an Israeli soldier who was on a tank taking part in the killing of Palestinian civilians when he was captured (in 2006)," he said.

"I apologize to the fans and to the management of the club for not attending because of the invitation to Gilad Shalit," Sarsak told a news conference at the headquarters of the Red Cross in Gaza City."

That is called cutting off your nose to spite your face. Instead of putting forward the matter of Palestinian footballers, he completely ignores it. Shame on him.