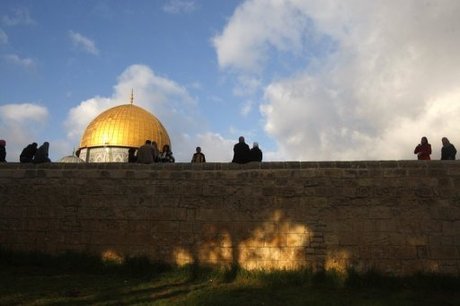 "A group of Arab Israelis threatened a group of Jews and Christians visiting the Temple Mount," police spokesman Micky Rosenfeld said of a first round of arrests in the morning in which five Arabs and a Jew were detained.

"The five Arab Israelis are suspected of making threats against visitors and police. The Jew who was arrested refused to comply with police orders," he added.

"Three Jewish rightwing activists who tried to force their way into the compound were detained for questioning," she said.

"Police are searching for the stone throwers," she added.

The arrests came after days of tension at the compound, known as the Temple Mount by Jews and the Haram al-Sharif by Muslims. It is the third holiest site in Islam and is revered as Judaism's most sacred place.

Israeli police on Tuesday arrested three Arabs and two Jews, including a prominent rightwing activist, for disturbing the peace and attacking police in the compound.

Tensions have been running high over a series of visits to the compound by Jewish activists belonging to a rightwing group known as the Temple Mount Faithful during the week-long Jewish holiday of Sukkot, which began at sundown on Sunday.

The compound houses both the Dome of the Rock and Al-Aqsa mosques, and is venerated by Jews as the site where King Herod's temple stood before it was destroyed by the Romans in 70 AD.

It is one of the most sensitive sites in Jerusalem, and clashes frequently break out between Palestinians and Israeli security forces at the compound.